HISTORY OF MYSORE SILK SAREE
The Mysore Silk sarees are one of the finest forms of sarees which is very popular across the globe. It comes in vibrant colors and gives a rich feel and a classic look to the saree. Like the Kancheepuram silk sarees the Mysore silk saree are also an innate form of the culture and the tradition of the people of both South and North India. The varieties of the Mysore silk sarees are compared in par with that of the world famous Kancheepuram sarees thereby topping the list. The origin of Mysore silk saree is from Karnataka and is supposed to be one of the purest forms of silk. It adds to one of the unique features of Karnataka and attracts customers from different parts of the country. The first Mysore Silk factory was started by the Maharaja of Mysore province in the year 1912 and effectively got into production in the year 1932.

MAHARAJA IMPORTED NEARLY 32 LOOMS FROM SWITZERLAND
The Maharaja imported nearly 32 looms from Switzerland which was the first of its kind in India. Though originally it was started with a motive to manufacture the silk for requirements of the Royal and aristocratic family and then to meet the ornamental fabric needed for the armed forces. After the independence of India, the silk weaving factory came into the control of Mysore state Sericulture Dept. But later it was transferred to the Karnataka Silk Industries Corporation Limited (KSIC) in the year 1980 and was completely updated to the latest technology and modernized and was expanded in a much bigger level by taking assistance from the World Bank to the tune of Rs. 27.30 crores integrated under Karnataka sericulture project. KSIC is the only organization in the country having a position of authority on the entire spectrum of silk production right from reeling of cocoons to the weaving of pure silk fabric of various shades and designs, all under one roof.

HIGH QUALITY STANDARDS EXPECTED FROM THE MYSORE SILK
The KSIC is able to meet with the high quality standards expected from the Mysore silk for it undergoes various complex steps in the production process. The Mysore silk sarees are intricately worked with zari and a golden lace at the edge of the saree which gives a classic and sleek look. The silk saress are available in different varieties and patterns and the most wanted variety in the market is the Mysore crepe silk. The artisans who are involved in designing on the Mysore silk have mastered the art of weaving. The Government Silk Weaving Factory is famous for producing beautiful Mysore silk sarees.

SPECIALTY OF THE MYSORE SILK SAREE 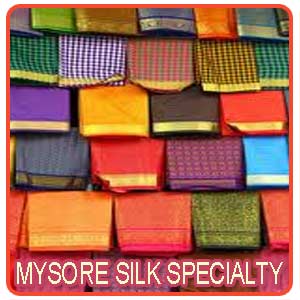 The famous Indian wear Mysore silk sarees are the trademark for the silk sarees produced by KSIC (Karnataka Silk Industries Corporation).The most distinct feature of the Mysore silk is the use of genuine silk and 100% pure gold zari, 65% of silver and 0.65% of original gold. The KSIC which is involved in the manufacture of the Mysore silk sarees has more than 159 looms and the best part of KSIC is that it is the only organization in the country which gives all the sarees weaved and produced here with an embroidered code number and a hologram to prevent misuse. The zari used by the KSIC always gives a fresh new look and never tarnishes. People are very much attracted by the shimmering and the glittering effect of Mysore Silk Sarees. In fact now the silk sarees are available in new trendy styles tempting the silk fabric lovers.

SPECIALTY
There are legends which say that when once Maharaja Krishna Raja Waudiyar IV made a trip to Britain to take part in Queen Victoria's jubilee celebrations he was very much galvanized by the machine- made silk fabric used by the British royalty. So he immediately worked on it and imported nearly 32 power looms from Switzerland and got into the production of these silk sarees.Today it is estimated that nearly 35,000 meters of the pure silk fabric per month and nearly 4, 25,000 meters per year, which are turned into numerous beautiful sarees, dress materials, dhotis and more.

TRADITIONAL DESIGN EXHIBITING THE CULTURE OF THE STATE 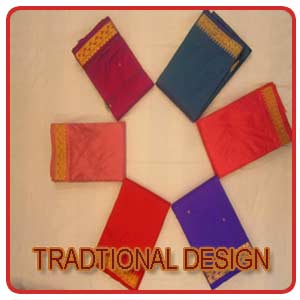 There are more than 115 varieties of sarees in more than 300 shades of colors which are designed by the KSIC. They are mostly designed according to their traditional design exhibiting the culture of the state and the pride of the place. The KSIC which is certified as an ISO 9001-2000 company has initiated lot of new designs of late.

The KSIC has also a tie up with the NIFT, Bangalore with which they come up with latest trendy designs in not only Mysore silk sarees but also in Mysore silk salwar suits, stoles, and much more. In fact the Mysore silk saree takes the pride of place in every Indian woman's wardrobe due to its rich sheen and unique design. Though it is not heavily designed but still stands a class apart because of its unique weave and smooth texture.

MANUFACTURED BY THE COUNTRY'S OLDEST SILK MANUFACTURING UNIT
It also takes the dignity of being manufactured by the country's oldest silk manufacturing unit – the Mysore Silk Weaving Factory at Mysore, Karnataka. In the year 2005 KSIC got the GI or the Geographical Registration patent certificate which adds a feather to its cap and thus became the sole proprietor. Even today the offshoot of the Royal family of Mysore, Srikanta Datta Narasimharaja Wodiyar has involved himself in the production and promotion of this sleek silk fabric in the brand name of Royal Silk of Mysore and the descendant himself is the acknowledged designer of this royal brand. The Royal Silk of Mysore can be purchased from the showroom present in the campus of the Mysore Palace complex.

PALLU IS DESIGNED WITH AN EXQUISITE DESIGN
Each saree measures about 5.5 metres where the end portion or the pallu is designed with an exquisite design and a blouse- piece material. Mostly the body of the Mysore silk saree is plain which itself makes the saree unique from the all the flowery elaborate designs found on other Indian silk sarees. It caters to the customers' tastes in showing varieties like Crepe-de-chine, Georgette, Zari printed crepe silk sarees and semi crepe sarees. Similarly when the sarees are maintained in the right way it remains with the same sheen even after decades. All these features have created a distinct brand for itself and thus not only attracts customers from the country but also from other parts of the world. 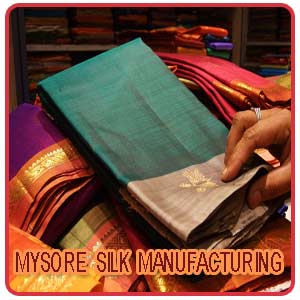 First the raw materials required in the production of the yarn are got where a single cocoon produces 800-900mts of yarn from which only 400-600mts can be used. This then goes to the silk weaving factory in Mysore where the density of the silk fiber is measured and for the production of a Mysore silk the manufacturer need 26-28 denier of the silk thread.

This is then followed by various steps like soaking, twisting, wefting and winding. Once winding is done the yarn is ready for weaving and it involves two types of looms namely the Dobby loom and the Jacquad loom where the former just need to be given with the required pattern to the design section which is then fed to the machine. However the Jacquard loom is quite laborious and needs experience.

SAREE IS THEN CUT ACCORDING TO THE ALREADY DECIDED LENGTH
The saree is then cut according to the already decided length. It is at this stage that the Identification number is designed on each saree. Finally it goes through the quality check and if there are any stains it is manually removed by using white petroleum and any extra protruding thread is trimmed to give the saree a finished look.Already with a brand created for the Mysore Silk Saree it is even now still making a big changeover or enhancement with new styles to attract and tempt the customers. The KSIC has come up with new patterns of zari in different vibrant colors. Some of the latest designs include kasuti' embroidery embellishments on saris and rich, thickly woven pallus.

BEAUTIFUL COLOURS ARE INFUSED IN THE MANUFACTURING
Even Bandhini styles with beautiful colours are infused in the manufacturing of Mysore Silk Sarees. Apart from the regular colors different hues of colors like lilac, coffee-brown and elephant-grey are being used recently. The designer Mysore Silk Saree having zari work all over and motifs like mango buttis, rich, floral border and elegant pallu is grand and an awesome wear for weddings, bridal parties, festivals and traditional functions. Thus lot of innovation is made in the manufacturing process of the Mysore Silk saree. The artisans of KSIC are highly motivated to incorporate new designs and patterns along with the traditional designs. It is considered an art by itself to get the genuine Mysore silk saree and usually the original sarees are priced between 1,000 - 50,000 INR depending upon the quality.

FEW EXCLUSIVE SHOPS IN KARNATAKA WHICH SELL THE GENUINE SILK
There are few exclusive shops in Karnataka which mainly sell the genuine silk and also now there are lots of good online websites to buy these sarees where the browser gets a plethora of choices under one platform and pick the one they wish to buy. It is also exported to almost all the countries in the world like Australia, United States Of America (USA), United Kingdom (UK), United Arab Emirates (UAE), Australia.. However now the KSIC is coming up with low cost Mysore silk sarees affordable to the poor. Most of the online sites which sell these sarees works on the basis of free shipping and cash on delivery. The marketing department of KSIC has come up with the provision like paying cash on installments on buying these sarees especially to government employees, including teachers and the ones working in banks. It plans to extend this facility to women's societies and self-help groups to ensure all women get an opportunity to buy a Mysore silk saree from the silk manufacturing unit.