CULTURE IS THE ART OF LIVING
The people of West Bengal are more popularly known as Bengali's and they speak the Bangla or the Bengali language which belongs to the Indo-Aryan group of the Indo-Iranian branch of the Indo-European language family. The people living in this north- eastern part of the country have close similarity to that of those in the country Bangladesh. There were different groups of people belonging to various communities who came into this state thus resulting in the diverse origin of the people of the state. However there are records which states that the earliest residents are said to have come from Veda in Sri Lanka and they were soon merged by the Indo-European language speaking Mediterranean people. Towards the end of the 8th century there were people entering into West Bengal who had their lineage from various groups like the Arabs, Turkish and Persians.The mix of these people put together is now known as the Bengalis. Most of the Bengalis follow the religion of Hinduism. During the early 21st century most of the Bengali population were rural and agriculture was their main occupation taken care of by the men in the family and the women were in charge of domestic works. But however men and women have upgraded themselves much more. The Bengalis have a liking towards traditional classical music and dance forms. The culture of West Bengal can be best expressed as comprising the following :


ORIGIN AND ETHNICITY
The people of Bengal have at least five different racial groups which resulted in a rich inter mixture of these racial strains. However the people of Proto-Australian origin are supposed to be the oldest in the group of population. Nishads were indigenous tribe inhabiting ancient India mainly in the plateau fringe and beyond into Chhotanagpur and central India. They had features distinct to their community like long head, dark skin, broad-nose and short stature. These people make the lowest castes in Bengal, the peasants and they were labeled as Negritos or the Negroids. Next was the entry of the Dravidians from the northern Mediterranean region who were characterized by long heads, tall, sharp nose and prominent chin. The Dravidians were closely followed by the round headed Sumerians from the Western region. The fair- skinned Alpines or Indo-Aryans came in to Bengal who were featured with oval face, prominent nose and long body. The fifth racial strain, the Mongoloid is represented in the population of the Darjeeling district of northern West Bengal, which is of the Tibetan type. All these races clearly indicate the Mongoliod features of the Bengalis.

CULTURE
The culture of the Bengalis gives a special identity to the state with various unique features of heritage in its music, cinema and specially its literature. The Bengalis boast of one of the richest and vibrant culture in India which is a perfect blend of modernity and tradition. The people of Bengal have contributed a lot towards the creation of such a magnificent atmosphere. The Bengalis were not only pioneers in reformation movements but also the people of Bengal were the first to experience the cosmopolitan culture in the country. Some of the important constituents of the culture of the Bengalis are its music, Bengali cinema, Bengali literature and of course the Bengali cuisine. The sanctity of Hooghly, the beauty of Eastern Himalayas, the diversity of Sunderbans and the freshness of the Tea Gardens, all blend together to constitute what we call the unique culture of West Bengal. Bengal is the birth place of several social reformers like Raja Ram Mohan Roy, Vidyasagar, great saint Ram Krishna Paramahamsa and Nobel Laureate Rabindranath Tagore. The Bengalis are said to have inherited a rich genetic features from their earlier generations which is proved by the popular saying 'What Bengal thinks today, Rest of India will think tomorrow'.


CUSTOMS AND TRADITIONS
Apart from the religious rituals and ceremonials the people of Bengal or the Bengalis have their own rituals in ceremonies like birth, weddings and even death. The Gaye holud is a part of a custom of the Bengali wedding and it takes place one or two days prior to the occasion. The Gaye holud is also known as the turmeric function during which haldi is applied on the skin of the bride and the groom for it is believed that turmeric cleanses, soften and brighten the skin, giving the bride's skin the distinctive yellow hue that gives its name to this ceremony. According to Bengalis, the weddings symbolizes purity, sanctity and other good aspects of life. During a wedding ceremony Bengalis do not opt for black colour for it is considered as the colour of evil whereas they prefer hues of red which signifies luck, emotion and fortune. Banana tree is used to decorate the wedding mandaps and the house for banana tree produces huge number of fruits at a time and so also the couple should be blessed with many children. A ritual known as Annaprashan is conducted for the babies when it is five to seven months old. This is just to welcome the baby to eat the normal home-made food after it crosses the stage of eating baby food pattern.


COSTUMES
The traditional attire of Bengali men is generally a white dhoti atopped by a Punjabi. The Dhoti is tied at the waist and wrapped around like a loin cloth passing in between the legs. Now dhotis are available in many bright colours.The Punjabi of different colours are usually silk in texture and are quite loose and goes up to the knees. These Punjabi are very much similar to that of the kurtas. However with modernization, western outfit have become in vogue. So the dhotis and the punjabis have become more of a traditional costume worn during social and religious gatherings. Lungi, worn by most Bengali men, is meticulously designed in cotton, silk or batik, and comes with a variety of colours and designs. Though it is not a formal wear, it is very much preferred by the Bengali men as a casual wear. The Bengali women are very much known for the way they drape their sari or the Bengali fashion which is very much unique to them. They mostly prefer cotton and silk saris. The traditional weavers or Tanti's of West Bengal are reputed worldwide because of the quality of fabric spun and their elaborate thread work. The Bengal saris are very famous across the globe. Places like Murshidabad, Malda, Nadia, Birbhum, Bankura and Hooghly in Bengal are involved in weaving different varieties of saris. Banarasi Sarees are their traditional outfit during special occasions. Apart from saris they also wear Salwar-Kameez.

Bengali's are very much particular about their food and their main specialty is the perfect blend of sweet and spicy flavors. Rice and fish is their staple food. They consider that their meal in incomplete if their daily menu is not enhanced with fish. They never miss out on the five essential spices in their cooking namely mustard, fenugreek seed, cumin seed, aniseed, and black cumin seed. The Brahmins of Bengal also eat fish and of course it is a part of every festive ocassion.The Bengalis use more of mustard oil in their cooking. Whether it is the supper or the lunch the menu ends up with mishti and sweet curd. Bengali food is famous for its mithais especially milk sweets. Rasogolla is not only popular in Bengal but across the globe. The fish market in Bengal is always stocked with wide varieties of fish, the popular ones being salmon, hilsa, bhekti, magur, carp, rui and prawns. Some of the popular Bengali sweets are Chum Chum, Pantua, Pitha, Rasgulla and andesh. Muri, Jhal-Muri and Moa are notable Bengali snacks. 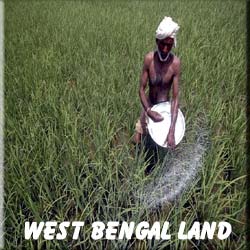 The main occupation of the Bengali's is agriculture. Industries is also a major source of employment in Bengal. West Bengal has a number of steel plants which employ lot of people. The alloy steel plant at Durgapur is very famous.

The colliery at Asansol is also a large employment provider in the state. There are lot of small and large scale industries in association with tea, sugar, chemicals and fertilizers. In the area of tea and jute plantation considerable amount of job is given to people.