Buddha Poornima generally falls on a full moon day either in the month of April or May commonly referred as Vaisakha.Buddha Poornima not only commemorates the birth anniversary of Lord Buddha but also his death anniversary and attainment of enlightenment and salvation. Though it is celebrated all over the world with different names the origin behind this festival is the same involving birth, enlightenment and ultimate passing away of Lord Buddha, founder of Buddhism.

Thus, Buddha Jayanti celebrates the three most important events in Gautama Buddha's life. Buddha Poornima festival is celebrated with great pomp in India because it is here where Buddha witnessed the miseries of the human life, renounced all His worldly pleasures and attained enlightenment. In other parts of the world it is also celebrated as Vesak or Wesak.This day is highlighted with prayer meets, sermons and religious discourses, recitation of Buddhist scriptures, group meditation, processions and worship of the statue of Buddha. Apart from prayer ceremonies the houses of Buddhists are adorned with electric lights and beautiful decorations. 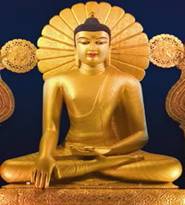 According to legends Gautama Buddha whose original name was Siddhartha was born in the year 544 B.C. in a royal family to Queen Mahamaya.Soon after his birth the court astrologer named Asit, predicted that the child would redeem the world. He was given the best of comforts and was taught with all the arts required for a princess. However was not interested in all this and did not want to be a Kshatriya but instead he was interested in seeking the light of knowledge.

He had more questions about poverty and sufferings. One fine day he took off from all this worldly pleasures and went in search of truth and started meditating under a Bodhi tree in Gaya where he got the answer for all his questions and attained Nirvana which is also celebrated as Buddha Poornima.After achieving enlightenment he wanted to preach his findings to the world and started travelling to far away places. Soon many people including kings, scholars and sanyasis became his followers. There are legends saying that his wife Yashodhara, his first disciple Ananda and his charioteer Channa, and the horse Kantaka were all born on this same day.

On the day of Buddha Poornima people who can afford try to make a pilgrimage to Bodh Gaya to participate in the birth celebrations of Gautama Buddha. The main rituals on the festival day include prayers, group meditations, Buddhists scriptures and sermons are read day and night continuously. Apart from this people gather and take a long processions either with or without the idol of Lord Buddha and reach the Buddhist monasteries where they worship and offer prayers to the statue of Buddha.

On this day the temple is fully decorated with flowers and lights. They wear only white clothes and invite Buddhist monks home asking them to talk about the teachings of Buddha and offer them with alms. They strictly adhere in not eating meat for they consider it as a sin and show kindness to all animals by letting them go free from cages. They also distribute food and clothes among the poor. The Bodhi tree is decorated with flowers and lights and holy water and milk is sprinkled on the tree. They strongly follow the Panchsheel which is not to take life, not to lie, not to steal, not to take liquor or commit adultery.

Buddha Poornima is celebrated with great pomp and gay especially in Bodh Gaya in Bihar, Sarnath in Uttar Pradesh and Kushinagar.The celebrations includes prayers, group meditations, Buddhists scriptures and sermons are read day and night continuously. Apart from this people gather and take a long processions either with or without the idol of Lord Buddha and reach the Buddhist monasteries where they worship and offer prayers to the statue of Buddha. It is celebrated with great piety in the Buddhist areas where the surrounding is decked with flowers, colourful lanterns and electric lights. The tree at Bodh Gaya is also decorated in the same manner and people offer prayer by sprinkling holy water and lighting lamps around the tree. The monks read the Buddhist scriptures and the lay people listen to these recitals.

Celebrations around the World

On Buddha Poornima, Buddhists eat kheer , rice cooked in milk and sugar, which they share with the poor.