Children's Day is celebrated on the 14th of November which is also the birth anniversary of Pandit Jawaharlal Nehru. Jawaharlal Nehru was an outstanding statesman and was the first Prime Minister of independent India. He had a great passion for children and loved them a lot, which stood as the main reason behind the celebration of Nehru's birthday as children's day after his death in 1963.

Pandit Jawaharlal Nehru is popularly referred as Chacha Nehru by children. Most of the pictures of Nehru will always be with children which portrays his immense love for them. Jawaharlal Nehru was very much committed to children and their attitudes. Though children's day is celebrated throughout the country more emphasizes is given at schools with many activities involving children for it is a day of celebration for them in colour attires and sweets are given to them.Jawahar Lal Bhavan which is the national children's centre is also named after this eminent man, Jawaharlal Nehru. The story also goes that he started to wear a rose on his jacket after a child pinned one on it.

Children's day is the birth anniversary of Jawaharlal Nehru, one of the great national leaders who took part vigorously in India's freedom struggle. He gave a supporting hand for Mahatma Gandhi for the countries independence. Pandit Jawaharlal Nehru spent lot of his time with children for he was very fond of them and strongly believed that only a healthy and a happy child will grow upto be a responsible citizen who can build a strong nation in future. Children also inturn loved him very much and called him as Chacha Nehru or Uncle Nehru. Thus after his death in 1963 his birthday has been celebrated as children's Day in India and the celebration is mainly to remember this versatile man who was responsible for what the country is now. 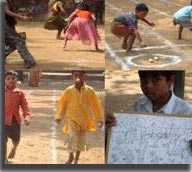 There are legends which says that Children's Day was first celebrated in the year 1954, as decided by the UN General Assembly and the person mainly behind this idea was Mr. V.K. Krishna Menon.

Children day was universally observed in October till 1959 and only after that the celebration date was changed to 20th November for it marks the anniversary of the day in 1959, when the Declaration of the Rights of the Child was adopted by the U.N. General Assembly adopted.

This is a day of fun and frolic for children where lot of cultural programs is conducted on the eve of children's day. Apart from the school communities there are also other corporate and social institutions arrange and conduct various competitions and cultural events for children. The teachers on this day perform special programs for the children to make them feel happy. Recent years various TV channels and radio channels organize special programs specific for children which goes for the whole day where the children considers it as a special treat. The children are given sweets and candies to mark the celebration of this special day. Thus the celebration on this day is set aside to remember Pandit Nehru and his true love for children.

The significance of the Children's day which Nehru wanted to put across was to ensure a safe and a loving environment along with lot of exposure and opportunities to take big steps in life and contribute more for the nation's welfare and progress.

Generally children love gifts so this can be considered as an occasion to give them surprising gifts by parents, teachers and elders. But however when you are planning to give them a gift keep in mind about their likes and dislikes and also it should be useful to them.