Dussehra or Dassera is a popular festival which is the celebration of the triumph of good over the evil. Lord Rama has won the battle against demon Ravana on this day. So Dussehra is also referred by another name Vijaydashmi.It is celebrated on the tenth day after Navarathri.The story of Ramayana is re-enacted throughout the country in Ram Lilas with pomp and show. Huge effigies of Ravana, his brother and son are burnt. These are of hundred feet high and filled with fire works.

Dusshera the festival of victory of good over evil has its root in the Ramayana which states that Lord Rama along with his wife Sita and brother Lakshman took off on an exile for a period of 14 years. During this exile period they underwent a lot of difficulties for it was the time when Sita was abducted by Ravana.So as a step towards this Rama along with Lakshman, Hanuman and an army of monkeys fought a battle against Ravana.This battle went on for a period of ten days in which finally Ravana was killed and defeated. Thus the origin of the word Dussehra means the cutting of the ten heads of Ravana by Lord Rama. 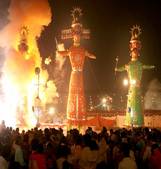 Apart from the story of victory of Lord Rama over the demon King Ravana, there is also another legend associated with Dussehra.Kautsa, son of Devdatt, a Brahmin, was living in the city of Paithan and was studying vedas from Rishi Varatantu.As a token of love and respect to his guru, Kautsa wanted to give some gurudakshina to his guru. But Rishi Varatantu was not for any gurudakshina initially but later asked for 140 million gold coins, one hundred million for each of the subjects taught. So Kautsa went to King Raghu for help who is known for generosity.The King inturn insisted on Kuber, the God of Wealth to shower a rain of gold coins near the shanu and apati trees. With this Kautsa paid the gurudakshina and gave the rest of the money to people who are really in need of it on the day of Dussehra. Dussehra also signifies the victory of Goddess Durga over Mahishasura, the demon who vested with absolute and authoritative power.

It is a festival celebrated for ten days where nine days celebration of Goddess Durga is preceded by Dussehra.The Durga Puja or the Navratri is dedicated to to Goddess Shakti. The other customs followed during this festival is fasting, chanting of mantras, religious hymns, prayer, meditation and recitation of sacred texts related to Durga Devi.The commonly followed custom of this festival is the placing images of the Goddess in homes and temples. As a part of customs and tradition fruits and flowers are offered to the Goddess. Bhajans is also an important part of customs and traditions. It is more of a community event, where everyone takes part irrespective of his or her social background. There are cultural programmes like Dandiya Raas and Garba Raas in which people take part. Sometime people also stay awake the whole night to please the god.

This is one of the most famous festivals celebrated by the Hindus all over the country with gaiety and zest. As a part of celebration in most part of the Northern India huge effigies of Ravana,his brother Kumbhkarna and son Meghnad are kept in open space and people dressed up like Lord Rama and Sita comes to this place and shoot arrows of fires on these effigies. The story of Ramayana is re-enacted throughout the country in Ram Lilas with pomp and show. The celebration varies from each place.

In Bengal the celebration goes for nearly ten days where on the last day idols are taken out in big procession and immersed in the holy water of the Ganges. This ten day is celebration in Maharashtra is split into two where the first nine days of Navratri celebration is dedicated to Goddess Durga and the tenth day is dedicated to Goddess Saraswati. In Mysore also Navratri is celebrated with great pomp and fervor during which the royal deity Chamundi is worshipped during Navratri.During Dussehra the streets of Mysore are brightly lit up with colourful lights to witness the procession of richly bedecked elephants.The major part of celebration in Tamil Nadu is the worship of the three Goddess namely Lakshmi, Saraswathi and Durga.

Celebration of Dusshera around the world mainly involves friends and family get together where they put up gollu.Children are more interested in making "diyas" or the small clay lamps and light it to bring good luck and prosperity. It is also a day for new and silk clothes.

Celebration never goes without gifts for it is one of the best ways to show your feelings and love for each other. It is a wonderful opportunity to send good wishes to near and dear ones in the form of Gifts like sculptures and idols of Lord Rama and Durga,books,cassettes and CD's on hymns and devotional songs.