Mahatma Gandhi's birthday is celebrated as Gandhi Jayanti on 2nd October every year and it is a National holiday. Gandhiji popularly known as the "Father of Nation" is also noted for his peace and truth. Gandhiji was the one who started the 'Satyagraha' movement for the Indian freedom struggle and played a major role for the countries independence from the British by his non violence.

He was killed by Nathuram Godse on the same day just a year after he got independence for the country. Thus apart from celebrating his birthday it is a day to honour and pay homage to this man of esteem and the entire martyr's who sacrificed their life for the countries independence and welfare. 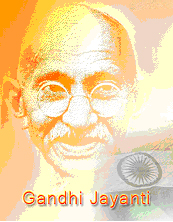 All schools, institutions, government offices and markets remain closed. Gandhi Jayanti is observed all over the country, both in government and non-government forums. October 2nd is a National holiday. Prayers and hymns are sung at his memorial in Raj Ghat.There are prayer meetings held across the country. Most of the meetings held in association with Gandhi Jayanthi will have the song sung Raghupati Raghava which is one of Gandhiji's favourite song.

Apart from the prayer meetings and worshipping of Mahatma Gandhi at his Samadhi in Rajghat there are also bhajans sung in his memory. A prayer meeting is also held where representatives from different religions take part in it. Celebration for Gandhi Jayanthi is much more in educational institutions which include painting and essay competitions along with various projects based on Gandhiji's life. The other ways of remembering this great soul and his contribution to the country are by distribution of free medicine to the poor, painting of community walls and much more.