Guru Nanak Jayanti is celebrated around the month of November and is considered to be as one of the most sacred festival of the Sikh community. Guru nanak Jayanti is the birth celebration of the first Sikh Guru, Guru Nanak.Most of the Sikh festivals is closely related to the birth anniversaries of the ten Sikh gurus which is celebrated in the name of Gurupurabs.The ten Sikh Gurus are supposed to be responsible for the shaping of the code of conduct for the living of Sikh life. Guru Nanak was born on April 14th 1469 in Pakistan presently known as Nankana Sahib in the Shekhupura district. His birthday usually falls on a full moon day in the month of karthik.

There is a legend which says that Guru Nanak was born in a Kshatriya family and he showed interest in studying both Hinduism as well as Islam. He was married to a woman named Sulkhani and had two sons, but soon he gave up all his vises and left his family and became an ascetic. At the age of thirty he witnessed the death of Kabir, a Muslim teacher. The death of this person brought a major change in Guru Nanak's life where he started saying" there is no Hindu, there is no Mussalman."

Some of the main rituals of Guru Nanak Jayanthi is the reading of the Granth Sahib and the Akhand Path by the devotees. It is a part of custom as well as a ritual to offer Langar or community lunch in many places. Singing o hymns and kirtanas are also a part of the Guru Nanak Jayanthi.The devotees on the day of the Guru's anniversary dress up in their traditional attire and don kirpans, reflecting their warrior qualities. 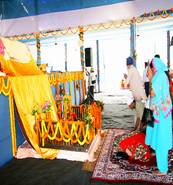 The celebration for Guru Nanak Jayanthi goes for about three days. The first day of the celebration starts with Akhand Path in all the Gurudwara which is the non stop reading of the sacred book of the Sikhs, Guru Granth Sahib. The second day of celebration witnesses a procession led by the Panj Piare and the Palki where the former carries the Sikh flag known aas Nishan Sahib and the later leads the procession. The procession is quite long with varieties of display. The Palki is followed by a team of singers all singing pious hymns which is closely followed by different tunes played by the brass bands. Next comes the Ghatka team exhibiting their special martial arts skills,swordmanship.The procession goes through most of the main roads and streets of the town spreading the message of Guru Nanak.

The procession is welcomed with joy and happiness. On the day of the birth anniversary or Guru Nanak Jayanthi the celebration starts very early in the morning with the singing of Asa-di-Var.This is followed by the singing of other hymns from Guru Granth Sahib. After the hymns the other highlights of the day includes the reading of Katha lectures and recitation of the poems are done in praise of Guru Nanak.Around afternoon a huge community lunch or Langar is arranged which is an invitation for everyone irrespective of religious faith.

The concept behind this lunch was to eradicate caste system and was first started by Sri Guru Nanak Dev Ji.At about 1:20 am, the actual time of the birth, the congregation starts singing Gurbani. The function ends about 2 am. Similar kind of celebration involving Kirtan, Path, Ardas, Karah Parsad and Langar are also carried out at home when there no Gurudwaras in any particular place. The celebration ends with crackers and fire works.

On the day of Guru Nank Jayanthi you can surprise your friend or your family member by arranging a visit or trip to the Golden Temple in Amritsar by a travel package. The other choice of gifts also includes presenting of miniature copies of Guru Granth Sahib. You can also gift a decorative item of a model of the Golden Temple or a photo frame of Guru Nanak."IK OANKAR" pendant can also be given as a gift for your loved ones.