The 26th January of every year is celebrated as the Republic Day to commemorate the adoption of our own 'Constitution of India' on the same day in the year 1950.It was on this when the country finally enjoyed the freedom of spirit, rule of law and fundamental principle of governance. The whole country celebrates the Republic Day as the National festival and the day is also declared as a national holiday. The patriotic fervor of the Indian people on this day brings the whole country together even in her embedded diversity.

On the occasion of the Republic day every part of the country is represented and highlighted. It is so enthusiastic to witness the main event of the day which is the Republic Day parade at Rajpath in New Delhi, the national capital where the President views and takes up the parade while almost all the government and political officials sit back as spectators to watch the events. The celebration of the Republic day is not only confined to the National capital for it also happens in all the state capitals. However the day's celebration starts with the solemn reminder of the sacrifice of the martyrs.

The history behind the 26th January is that it is on this day India became a truly sovereign state and the constitution of India came into action in the year 1950.However the first move for the Republic day was made on 31st December 1929 midnight in the Lahore Session of the Indian National Congress. It is on this day the tri-colour national flag was let go and hoisted by the nationalists. Thus from then on a pledge was taken to celebrate the Independence day on the 26th January and people should work towards the upliftment of establishing a&nbsp; Sovereign Democratic Republic of India and this promise was brought into force when the Indian Constitution framed by the Constituent Assembly came into action on 26th January 1950 inspite of our Independence from the British on 15th August 1947. 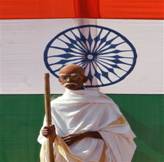 Apart from the political history of the Republic Day, the significance behind its celebration is to reflect the countries rich cultural heritage and tradition which brings the whole country under one roof despite of her diversity. It also reflects the countries secularism and democracy. India which has a multi cultural status makes us feel proud for our languages, social norms, traditions, customs, religions, communitarian and the individual distinctiveness. The celebration of the day is also to culminate in us the feeling of a proud Indian. It is the day, which guarantees the Fundamental rights to the citizens, equality of religion and so on.

The main highlight of the Republic Day celebration is the Parade. The day's celebration commences with the President's speech to the nation that includes a solemn reminder of the sacrifice of the martyrs who died for the country in the freedom movement and protected sovereignty of their country. The grand parade of the Republic Day starts at Rajghat near the Rashtrapati Bhavan and passes via the Rajpath, India Gate and finally ends at historical Red Fort.

The Commander-in-Chief of the Indian Armed Forces, the President of India takes the salute of the parade near the India Gate. The President is accompanied by a notable foreign Head of State - who is the invited Chief Guest at the celebration. Along with the army, navy and the air force the different Indian states, union ministries, government organizations also take part in the parade with their finery and official decorations. The parade also involves the participation of N.C.C cadets and school children. The other added features to the parade includes the skilful motor-cycle rides by the Armed Forces personnel and the parade is concluded by the most awaited item which is the fly past where the fighter planes of the IAF roar past the dais,symbolically saluting the President.

This parade is followed by a cultural parade performed by the various states of the country depicting the rich cultural heritage, unique festivals, historical locations and art pertaining to that particular state. There are drills by school children, a pageant of spectacular regional displays exhibiting lifestyle, music and songs of that particular state giving the occasion a festive air. This is followed by the award ceremony where for the exceptionally performed people from all the three forces are awarded with bravery medals, Param Veer Chakra, Veer Chakra and Maha Veer Chakra. Republic Day is also the time when exemplary achievements for valor and excellence among children and individuals are recognized and rewarded throughout the country. Selected children are awarded the Children's Bravery Awards on this day.

The 27th of January witnesses a Prime Minister's rally held by N.C.C cadets displaying various breath-taking performances and drill. A National Folk Dance festival referred as "Lok Tarang" is held from 24th to 29th January on the eve of Republic day. This is held in association with the seven Zonal Cultural Centres by the Ministry of Culture, Government of India. The major attraction of this festival is the authentic folk dances drawn from various parts of the country.

Beating the Retreat is to denote that the ceremony of the Republic Day comes to an end. This event is conducted on the evening of January 29th.It is commenced with the massed bands of the three services marching in unison, playing popular marching tunes. A solo performance is also given by the drummers followed by play Abide with me and ends with the bugle call for Retreat, the band master then marches to the President and requests permission to take the bands away, and informs that the closing ceremony is now complete. The bands march back playing a popular martial tune Saare Jahan Se Achcha.At exactly 6 pm, the buglers sound the retreat and the National Flag is lowered, and the National Anthem is sung, bringing the Republic Day celebrations to a formal end.