However, India's exportable cotton supply was only six million bales in 2012-13, as against 11.75 million bales last year, given an expected drop in production and higher domestic demand.

If the government increases the minimum support price (MSP) for cotton significantly, planting intentions could shift and there would be a boom for the cotton industry in India.

There is some concern within the industry even as productivity has increased from an estimated 300 kg per hectare to 500 kg hectare since the introduction of biotech cotton in India. 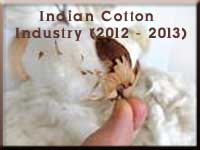 The increasing prevalence of pests, the need for better fertilizer management, the spread of cotton into dry-land areas and seed quality are all cited as factors affecting yields in the Indian cotton scenario.

It is to be noted that India's two-thirds of cotton is produced in Maharashtra, Madhya Pradesh, Gujarat and Odisha where much of the crop is rain-fed.

back to cotton INDUSTRies