India was the fifth-largest automobile market, with around 3.81 million units combined sold in the passenger and commercial vehicles categories. It was the seventh largest manufacturer of commercial vehicles in the year 2020. The two wheelers segment dominated the market in terms of volume owing to a growing middle class and a nascent population. 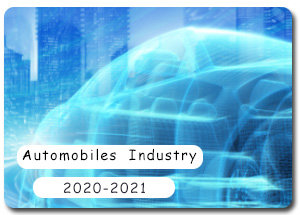 India's electric vehicle (EV) market is estimated to be a Rs. 50,000 crore (US$ 7.09 billion) opportunity by 2025, with two- and three-wheelers expected to drive higher electrification of the vehicles. EV sales, in India witnessed a growth of 20% and reached 1.56 lakh units in FY20 driven by two wheelers. According to Industry sources, India's EV finance industry is likely to reach Rs. 3.7 lakh crore (US$ 50 billion) in 2030.

The Indian Automobile industry has attracted Foreign Direct Investment (FDI) worth US$ 24.62 billion between April 2000 and September 2020, according to the data released by Department for Promotion of Industry and Internal Trade (DPIIT).

back to automobile INDUSTRY