Cashew is a cash crop that is cultivated in India and is also known as the wonder-nut.

Maharashtra is leading in cashew production with 32.3% share. In India, it is grown in the west coast, east coast and in a few plain areas in Karnataka and Madhya Pradesh. 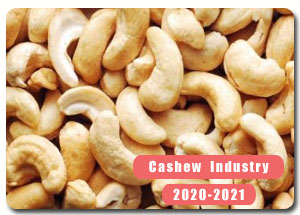 India is the largest producer of cashew in the world with 25.52% share in world production. In India each metric ton of raw cashew seed produced and processed, yields about 230 kg (23%) of exportable grade kernels. Cashew generates employment in the processing and agrarian sector of India employing over 3 lakh persons with more than 95% of them being women.