India is the second largest producer of cement in the world. It accounts for more than 7% of the global installed cement manufacturing capacity. India’s overall cement production capacity was nearly 545 million tonnes (MT) in FY20 and accounted for over 8% of the global installed capacity in FY20. Cement production reached 329 MT in FY20 and is expected to reach 381 MT in FY22. 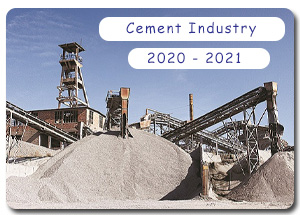 The total cement consumption in the country stood at 327 MT in FY20 and will reach 379 MT by FY22. Key players in the cement industry Indian scenario are ACC, Dalmia and Ultratech Cement.

In the second quarter of FY21, Indian cement companies reported a sharp rebound in earnings and demand for the industry increased, driven by rural recovery shortly after the second covid wave ebbed down. With the rural and urban markets normalising, the demand outlook remained strong.

According to the data released by Department for Promotion of Industry and Internal Trade (DPIIT), cement and gypsum products attracted Foreign Direct Investment (FDI) worth US$ 5.28 billion between April 2000 and September 2020.

back to cement INDUSTRies