INDIAN DEFENCE MANUFACTURING INDUSTRY AT A GLANCE IN 2020 - 2021

The Indian Defence Manufacturing industry is likely to accelerate with rising concerns of national security and tough relationship with some neighbours. The demand for defence equipment in India has been growing due to the ongoing territorial disputes with Pakistan and China . Over the last five years, India has been ranked among the top importers of defence equipment.

The Indian government has set the defence production target at US$ 25.00 billion by 2025 which includes US$ 5 billion from exports by 2025. 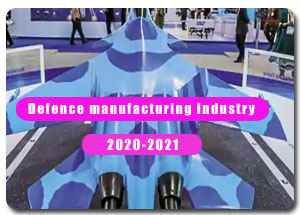 India’s defence manufacturing sector has been witnessing a CAGR of 3.9% between 2016 and 2020. Defence exports in India was estimated to be at US$ 1.29 billion in 2020. India’s defence import value stood at US$ 463 million for FY20 and is expected to be at US$ 469.5 million in FY21. Defence exports in the country witnessed strong growth in the last two years.
India targets to export military hardware worth US$ 5 billion (Rs. 35,000 crore) in the next 5 years. As of FY20, India is ranked as the 19th in the list of top defence exporters in the world by exporting defence products to around 42 countries.

Foreign Direct Investment (FDI) equity inflow in the defence sector for April 2000 - December 2020 stood at US$ 10.15 million (Rs. 61.51 crore) as per data released by the Department for Promotion of Industry and Internal Trade (DPIIT).

The Indian defence ministry estimates potential contract worth about Rs. 4 lakh crore (US$ 57.2 billion) for the domestic industry in the next 5-7 years .
The Indian government is focussing on innovative solutions to empower the country’s defence and security and develop new technologies/products in the next five years (2021-2026).
The Defence Ministry has set a target of 70% self-reliance in weaponry by 2027, creating huge prospects for industry players.