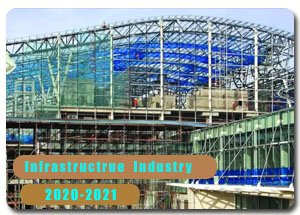 The Government of India allocated Rs. 111 lakh crore (US$1.4 trillion) under the NIP for FY2019-25. Sectors such as energy, roads, urban and railways amount to about71% of the projected infrastructure investments in India. According to the Department for Promotion of Industry and Internal Trade (DPIIT), FDIs in the construction development sector (townships, housing, built up infrastructure and construction development projects) and construction (infrastructure) activities stood at US$ 25.93 billion and US$ 23.99 billion, respectively, between April 2000 and December 2020.

Future Prospects of the Industry

India plans to spend US$ 1.4 trillion on infrastructure during till 2023 to have a sustainable development of the country. The Government has suggested investment of Rs. 5,000,000 crore (US$ 750 billion) for railways infrastructure for about a decade till 2030.