The Mining industry forms the backbone of the Indian economy. It provides the basic raw materials for most of the other manufacturing industries. 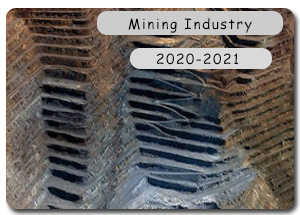 India is endowed with huge resources of many metallic and non-metallic minerals. India is home to 1,531 operating mines and produces 95 minerals, which includes 4 fuels, 10 metallic, 23 non-metallic, 3 atomic and 55 minor minerals. he number of mines which reported mineral production in India stood at 1405 in the year 2020.

India is the world’s second-largest coal producer and is the 5th largest country in terms of coal deposits. India has rich deposits of coal in the world. The total estimated reserves of coal in 2020 were 344.02 bn tonnes, an addition of 17.53 bn tonnes over 2019 in the corresponding period.

The mining sector in India was poised for robust growth in financial year 2020–2021, on the back of rising demand from end-use sectors and fresh investments announced by the mining companies. However, the spread of COVID-19, right at the beginning of the financial year, has led to disruptions across industries.

back to mining INDUSTRies