Around 80% of India’s music revenue is reportedly generated by soundtracks for Bollywood films. It is estimated that the scope of the Indian music market at $443 million. The Indian Recorded Music Industry has grown by 4.9% in 2020. Further, the Indian Recorded Music Market has been growing at an annual compound growth rate of 12.25% over the past five years. India’s recorded music industry revenues increased to about INR 1332 Cr in CY20. India is now ranked 17th in the world in terms of music industry revenue. 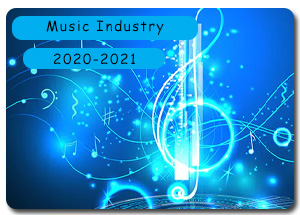 The global pandemic brought music performances to a stand-still and sales of music records collapsed, however digital streaming emerged as the saviour for India’s music industry.
Digital streaming revenues rose 21% in 2020 to $153 million, slower than the 26% growth recorded in 2019 but enough to push the overall music industry growth to positive territory despite a collapse in other revenue streams. Overall music industry revenues grew 5% to $180 million last year.

back to music INDUSTRies