India is the third-largest producer and second-largest consumer of electricity in the world and had an installed power capacity of 373.43 GW as of October 2020. India uses varied sources of power ranging from conventional sources such as coal, lignite, natural gas, oil, hydro and nuclear power to non-conventional sources such as wind, and solar. Electrical power demand in the country has increased rapidly and is expected to rise further in the years to come. In order to meet the increasing demand for electricity in the country, massive addition to the installed generating capacity is required.

India ranked sixth in the list of countries to make significant investments in clean energy at US$ 90 billion. India is the only country among the G20 nations that is on track to achieve the targets under the Paris Agreement. 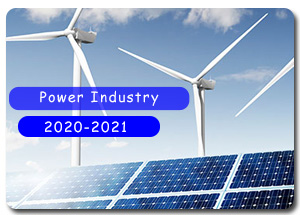 Investment into the Industry

Between April 2000 and September 2020, the Indian Power industry attracted US$ 15.23 billion in Foreign Direct Investment (FDI), accounting for 3% of total FDI inflow in India.

Industry Forecast
As per the Central Electricity Authority (CEA) estimates, by 2029-30 the share of renewable energy generation would increase
from 18% to 44%, while that of thermal is expected to reduce from 78% to 52% in India.

By 2022, solar energy is estimated to contribute 114 GW, followed by 67 GW from wind power and 15 GW from biomass and
hydropower. The target for renewable energy has been increased to 227 GW by 2022.

Coal-based power-generation capacity in India, which currently stands at 199.5 GW, is expected to witness total installed
capacity addition of 47.86 GW by 2022.

back to power INDUSTRies