India is the world’s second-largest steel producer. The Indian Steel Industry has recently seen good growth thanks to easy availability of iron ore and cost-effective labour. Consequently, the steel sector has been a major contributor to India’s manufacturing output.
The Indian steel industry is classified into three categories - major producers, main producers and secondary producers. India's current steel producing capacity is about140 mtpa and the figure is anticipated to rise to 300 mtpa by 2030-31. 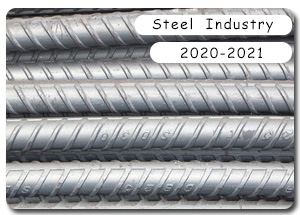 According to the data released by Department for Promotion of Industry and Internal Trade (DPIIT), the Indian metallurgical industries attracted Foreign Direct Investment (FDI) to the tune of US$ 14.24 billion in the period April 2000-September 2020. Under the Union Budget 2020-21, the Indian government allocated Rs. 39.25 crore (US$ 5.4 million) to the Ministry of Steel.

As per Indian Steel Association (ISA), steel demand will grow by 7.2% in the coming fiscal.

back to steel INDUSTRY