The Mahabharata, is one of the two major Sanskrit epics of ancient India, the other being the Ramayana. With more than 74,000 verses, plus long prose passages, it is one of the longest epic poems in the world. It contains eighteen Parvas or sections, each containing many subsections.This wonderful epic was composed by sage Vyasa, who was the ancestor of the heroes of this legend. It has been called the national epic of India and is considered as the Hindu bible. The best scholarly evidence indicates that the earliest layers of the epic were composed between 2500 and 3000 years ago. The text had reached pretty much its present form by about 300-400 C.E. 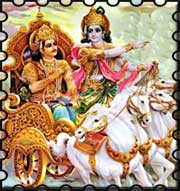 There are great creation stories, favorite myths and fairy tales, jokes and a great number of codes of moral, ethical and natural law. But Mahabharata is not a mere random collection of tales. Every digressive bit of the Mahabharata is there to shed light on a central story. The core event of that story is the great battle that was fought on the field of Kurukshetra between Kauravas and Pandavas. The battle was the culmination of a long history of struggle and diplomatic maneuvering. In fact, it was a tragic war, that pitted brothers against brothers, sons against fathers and uncles, brave noble men against brave noble men. And it was so devastating that nearly all of the best men died in the long battle. The Pandavas survived, but there was no victory, for the war had destroyed the world.

According to Hindu philosophy Yuga is the name of an era within a cycle of four ages. They are the Krita Yuga, the Treta Yuga, the Dvapara Yuga, and finally the Kali Yuga. The story of the Mahabharata war has cosmological significance because it marks the end of Dvapara Yuga and the beginning of Kali Yuga. Apart from the extent of its vision, Mahabharata has a captivating plot and a compelling dramatic structure. Its characters are complex and real, with depth of personality that is unmatched in any other epical story. The Mahabharata is full of wisdom. Since the story has cosmic significance, its ultimate beginnings are lost in the mists of time and the minds of unknowable immensities; a wealth of family histories, myths, and fables lead up to the events that I will tell you about.


THE STORY OF MAHABHARATA

The epic is the story of the descendents of King Bharat; rather it is the story of ancient India. It revolves around the struggle for the throne of the kingdom of Hastinapura between two branches of the same family, the Kauravas and Pandavas. Pandu and Dhritarashtra were brothers. The Kauravas were collectively the hundred sons of the blind king Dhritarashtra and the Pandavas were the five sons of Pandu. Pandu died of a curse. After the death of King Pandu, his blind brother Dhritrashtra succeeded the throne. He brought up the five sons of Pandu.

The five brothers named Yudhisthira (eldest son), Arjuna, Bheema, Nakula and Sahdeva were always obedient and dutiful, which made them the most loved in the kingdom. Each of the Pandavas had a special virtue in them that made them stand apart from the rest of the world. The eldest son of Dhritrashtra, Duryodhana, became jealous of the virtuous Pandavas and planned to get rid of them. However the Pandavas escaped his devious plans and lived in the forest disguised as Brahmins.. However, Duryodhana and the rest of the world believed them to be dead.

King Draupad proclamed to hold a Swayamvara for his daughter's marriage. Suitors including Duryodhana had gathered from all over India. The Pandavas too had gone there. Each suitor was required to bend a bow of enormous strength and hit a revolving small fish while watching only its shadow in boiling oil. Only Arjun, third of the Pandavas, could bent the bow and hit the target and Draupadi chose him as her husband. However as per their mother Kunti's wish it was decided that Draupadi would marry all the brothers together. Dhritrashtra and his son came to know that Pandavas were alive. On the advice of Bhishma, Dhritrashtra's uncle, half of the kingdom was resentfully handed over to Pandavas. Yudhishthira, the eldest brother of the Pandavas, was crowned king. Falling prey to Duryodhan's wicked plans, Yudhishthira played dice with him and lost his kingdom and went back to the forest with his brothers to live in exile for 12 years as per the condition. At the end of the exile Yudhishthira legitimately claimed for the return of his kingdom, but the selfish and greedy Duryodhana refused to relent. War became inevitable. Both sides wanted the help of Lord Krishna (a manifestation of God according to Hindus). "Either you have my army or me alone; But I shall take no part in fighting," Krishna offered both the same choice. 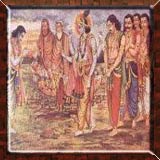 Duryodhana wanted to have the army but Arjuna chose Krishna, and asked him to be his personal charioteer. The battle was fought on the plane of Kurukshetra. Just before the commencement of the battle Arjuna had fallen into an illusion and refuses to fight against his own kin. Lord Krishna, who had been the sole advisor, guide and true friend of the virtuous Pandavas and helped them all through the time of anguish and distress, taught him the righteous nature of the Kurukshetra war and the need for him to fight the battle without hesitation. He imparted valuable and practical lessons of the great Indian epic, Bhagawad Gita. Arjuna heeded to Lord Krishna's advices and decided to fight.

The war lasted for only 18 days and the Pandavas won the battle. They ruled over Hastinapura for a number of years. It is said that Dhritarashtra and his wife retired into the forest to lead a life of an ascetic. Krishna is believed to leave around thirty six years after the battle. When the Pandavas felt that it was time to leave this earth, they all set out on a journey towards the North on foot. It is said that the gates of Heaven were open for them on the northern horizon.


MAHABHARATA AS A WORK IN PROGRESS 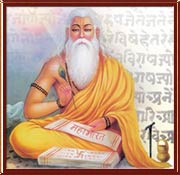 There are "hundreds of Mahabharata, hundreds of different manuscripts and innumerable oral versions". The Mahabharata is a story which is constantly retold and rewritten. When it moved from "one storyteller to another, new tales were added, tales of ancestors and descendants, of teachers and students". Each of them, while remaining faithful to the central story line, interprets the events and the morals drawn from it, in his own way, to suit the ethos of his time and region. Successive generations have added their own philosophical and metaphysical insights; their knowledge of genealogy, history, geography, politics, economics; their understanding of science and technology etc. This is reason why Mahabharata is called "a work in progress".

Mahabharata describes itself an all-inclusive text which is unlimited in both time and space. It unmistakenly states this in the following line: "Poets have told it before, and are telling it now, and will tell it again. What is here is also found elsewhere, but what is not here is found nowhere else."

Satya (Truth) and Dharma (righteousness) are the core teachings of Mahabharata. Through its innumerable and detailed narratives, it tries to create moral awakening among mankind and drives home the need to do good deeds, practise dharma, cultivate dispassion and refrain from indulging in evil deeds by realising the illusory nature of this universe. Even in the most excruciating circumstances, it urges everyone to stick resolutely to the path of dharma which practice will lead to attainment of "fame, prosperity, long life, eternal bliss, everlasting peace and immortality."