The origin of Sati is not definitely known, but generally it has been ascribed to the self-immolation of God Shiva's wife, Sati. She, on finding that her husband was not invited by her father, Daksha, for some Yaga, to which he had invited all the other deities, created a fire out of her innate powers and immolated herself in front of the guests.

Sati is of great antiquity but was not favored from ancient times by all legists. All the ancient scriptures disagree with sati and say that one should not die before ones' destined time. Sati was mentioned by Vishnu (100-200 A.D.) as the other alternative for a woman after her husband's death if she is not able to lead a chaste life.

In spite of the disapproval, we find that in the Mahabharatha, that Madri burnt herself on the funeral pyre of her husband. In the sixth century, Sati was practiced in the South as well. In the Tamil literary work Silapathikaram, it is mentioned that Kanaki went with her husband to Madurai. There Kovalan was wrongly accused of stealing one of the anklets of the Queen. The king, without further enquiry ordered the man to be prosecuted.

When Kanaki heard of this, she committed Sati after cursing the city. During the Chola period in the South, women voluntarily committed Sati saying that if they lived after their husband's death they would be enslaved by their co-wives, or would be misused by the men of their place and so on. But pregnant woman were not allowed to commit sati. 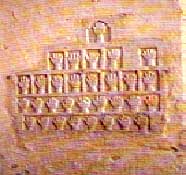 Sati appears to have continued during the Mughal rule too, and Akbar tried to abolish this system but in vain.The ritual of Sati goes on like this; When a man dies, his corpse is taken to the cremation ground, his wife accompanying it, attired in the best garments with her friends and kindred. Once the crematorium is reached, a fire was lit and after circumambulating the spot, she sits near the body and wails for her husband and then rejoices on the act that she is able to accompany her husband in death.

Then the people tie her on the pile and throw oil and dry sticks over it once the pyre is lit. In the town of Surat, even girls below 10 years who had child marriages were forced to perform sati just because the man to whom they were betrothed has been dead. Law at last after so many centuries abolished the usage of sati on December 4, 1829, in British India but it still seems to be there with one or two cases having been reported after the enforcement of the law.

Hindu women, to escape from the hands of the invaders, particularly the Muslims, resorted to Jauhar, with whom they did not want to have any contact. This is a variation of Sati, in that, in Sati, the woman is forced to die whereas in the case of Jauhar, the woman voluntarily vows to die.

Women often executed Jauhar when they were besieged and their men decide to face their foes and fight to death. But like sati it was not made compulsory, for many Rajput women, among those who suffered by an enemy confrontation did not commit Jauhar.

The Tulapurushadana or the royal weighment was a ceremony observed by kings and also by lesser people. It implied a gift, equal to the weight of a man in gold and later with precious metals and other objects. It was one of the sixteen great gifts, which have been mentioned in the Puranas.

Rukmini placing a Tulsi leaf in a weighing scale while Krishna sat in the other pan is an example of this in mythology. This ceremonious gift of the Tulapurushadana is also referred in the Tamil classic, Silapathikaram.This practice is observed even today by the common in fulfilling a vow made for the sake of children or some sickness or some sin, etc, in holy places and shrines. Akbar, during his solar anniversary was weighed against gold, silver, silk, perfumes, copper, drugs, ghee, iron, rice, seven kinds of grain and salt. These items were then distributed to the courtiers or the poor and beggars or prisoners, as a means of keeping away the royal person free from bodily and mental harm.

A system of coercion to exact or enforce one's demands in private and public life has been known in India from antiquity. It was called by Indian legists, ACHARITA or as it is now called in a new garb, Gherao. Sitting at the door of a debtor, or fasting or the creditor starving him to death can be taken as an example for the act of Dharna. Sometimes bribes could break up a dharna no matter how powerful it had been. Not only the common people but even the ruler, the ministers, the courtiers sometimes resort to dharna to have their demands met. Sitting on the door of the debtor and starving oneself to death may frighten the debtor as he would think that the creditor may die and his ghost shall haunt his house. Sometimes the creditor may try to immolate himself near the debtor or at times may carry a heavy unbearable stone on him until the debtor arranges some way to repay. Dharna is very much in vogue today with various unions and establishments going to the streets with out taking any food or without doing any work until their demands are met.

Svayamvara means choosing one's husband, oneself, in an open assembly. These days though women have the right to choose their husbands according to their own wish, it can't be termed svayamvara, as it is not the practice of choosing from a wide choice of men on one go. Such a selection is often made after a grand exhibition of strength, skill and such things, which marked out the candidate in a large crowd of eligible competitors. The maiden is usually a full-grown woman who could make her own choice, using her own free will, discretion and judgment. Such a system of choosing one's mate has been in vogue in India from antiquity.

In India, the svayamvara has been known from the days of the Mahabharata and Ramayana. In the former epic, we learn how the great hero and bowman Arjun won in an open tourney, the hands of Draupadi. The same epic tells about the choice of Damayanti, who, in an open assembly, selected her husband, the great Nala, preferring him to the gods Agni, Varuna and Indra. In the Ramayana, Rama won Sita; the daughter of King Janaka, in an open competition by bending the great bow, the weapon of god Shiva which none could bend.