One of the most famous Hindu temples in the world is at Tirumala crowning the seven hills, with Lord Venkateshwara as presiding deity. Millions of pilgrims visit the shrine every year.Tirumala has well laid out parks, accommodation and a free bus service between various locations in the temple town. Amidst the thickly wooded hills in Chittoor district lays the temple town of Tirumala with Tirupati at the foothills.

Tirupati is situated in the Southern region of Andhra Pradesh of Chittoor district and is at a height of 3200 ft above sea level in the Eastern ghats.

Most of the major dynasties of the Southern region of India like Pallavas, Cholas, Pandyas and Vijayanagara pradhans visited this temple of Lord Venkateshwara and offerd prayers. But soon after the decline of the Vijayanagara Empire, it was visited even by other Kings from different parts of the country where along with prayers they also gifted valuables and precious ornaments. It was only after the Maharastrian commander, Raghoji Bhonsle there were regular pujas performed in the temple and in the year 1933 a special statutory authority was appointed to administer the temple under the instruction of the Madras government. 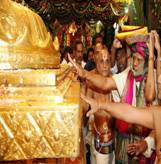 During Adika Masam, which comes in every third year a grand and a major Brahmotsavam is celebrated followed by a car festival 'Rathotsavam'on the third day. These festivals attract thousands of pilgrims from various parts of the country.

This is about 3km north of the main temple and is a perennial stream that is said to flow through the deity. The Akasa Ganga as it is called is considered sacred as the vedas describe it as flowing from the feet of Lord Vishnu. The water from here is used for the daily rituals in the temple. 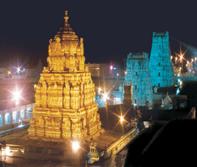 The temple at Tirumala hills is famous all over the world and millions of pilgrims from across the globe visit the temple annually. The main temple is an excellent example of ancient Indian temple, architecture, particularly from South India.

This temple is also referred by other names like Tiruchanoor and Alamelumangapuram which is at a distance of about 5km from tirupati.This temple houses the deity of Goddess Lakshmi and the consort of Lord Sri Venkateswara.It is strongly believed that a visit to this temple is a must on your way back from Tirumala. 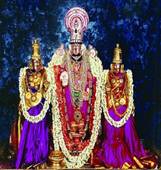 This temple belongs to the 10th century AD and was built by a Chola King.Kodandaramaswami Temple is situauted in the heart of the town and the presiding deities here are Sita,Rama and Lakshmana.Just opposite to this temple is the temple of Anjaneyaswami.

Srikalahasti is very famous for it has the shrine of 'Vayu Deva' the Wind God which is the only one of its kind in India.This town belongs to the 16th century and it is at a distance of about 60-km from Tirupati on the banks of Swarnamukhi river. This temple has the most known 'Kalahasthisvara Temple' which houses the shrine of Shiva. 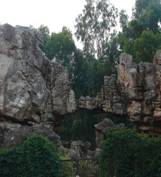 Silathoranam is about 1km from Tirumala Temple and has a rare naturally formed arch. Believed to be the source of Lord Venkateswara's idol, the rocks resemble hood of a serpent, a conch and a discus. It is a geological wonder.

This is a very beautiful dam at a distance of about 5km north of Tirupati.

History states that Chandragiri was the capital of Vijayanagar Empire and has a fort which is built on a 180m high rock. This palace along with the 'Raja Mahal' and the 'Rani mahal'is very well maintained. The Museum in Raja Mahal contains Chola and Vijayanagara bronzes.

This park houses 56 species of animals, birds and reptiles with a total of 500 animal specimens.

Shopping is quite interesting in Tirupati for they include woodcarvings, whitewood toys and kalamkari.One can also look for the Madanapalli famous Tanjore style Gold Leaf paintings which are famous for their mythological motifs and themes. Apart from the handicrafts items the Tirumala Tirupati Devasthanam also publishes a number of books and periodicals based on the treatises of Hindu religion. Shopping list in Tirupati also includes religious items such as photographs and idols of various Gods and Goddesses, brass lamps, rangoli stickers, and vermillion in garish boxes etc.Lepakshi Emporium is run by the TTDC which has all the collections of handicrafts items.

Tirupati airport is located at Renigunta, which is about 15 km away from the city. Regular flights are available from Chennai, Hyderabad and Bangalore to Tirupati.Nearest International airport is Chennai, which is connected to all major cities in India and many cities abroad.

Tirupati Railway Station is connected by trains from Bangalore, Chennai, Visakhapatnam, Madurai and Mumbai. A major railhead nearby is Renigunta, which is 15 km away. Renigunta is located in Trivandrum – Delhi route, which is connected to all cities in India by rail.