History :
Angami tribe belongs to the state of Nagaland which is the extreme north eastern part of the country. Nagaland has 20 tribes and Angami is one of them. The total population of the Angamis is around 12 million. The Angamis Tribes territory is the present district of Kohima district which is divided into four regions, in the South- Angamis are located at the foothills of Mt Japfu, Western Angami are in the west of Kohima, in North -Angamis are located in the north of Kohima and Chakhro Angami including mostly small villages around Dimapur district. 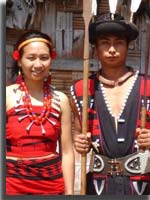 
Culture
Angamis are popular for their woodcraft and artwork all over India. People in India know them as the producer of bamboo work, cane furniture, beds, shawls and powerful machetes. They are very much fond of music and play great music with the help of drum and flute, which is passed on from one generation to the other. The simple and rythmic music plays the important role in their rituals and festivals. Traditional dancing is the main component in Angami gennas.

Angami women also practice pottery at their houses. Angamis are experts in basket making. Pork with bamboo shoot is the common dish among the Angamis. The Major religion followed by Angami Tribes is Christianity.The religious system of these tribes revolves around several supernatural forces of life associated with the life cycles. They believe that spirits are embodied in several objects and have sharply drawn the distinction between the Gods and the soul of the human bodies. Animism is another faith among the people of this tribe.


Occupation
Agriculture is the main occupation of Angami Tribe. Their cultivation includes rice and grains on the hilly terrains. They are predominantly agriculturists and can produce nearly twenty varieties of paddy crops every year. They also cultivate rice and grains on hilly terrains. The angamis, known for their environmental consciousness, use their water courses for terraced wet rice cultivation. One of the unique feature of their cultivation is that Angami Tribes carry on the cultivation with the wet rice on the hilly terrains, due to which the irrigational system has transformed the steep barren hills into picturesque rice fields.

Angami men and women wear are quite different from each other according to their designs. Men wear shawls called as white Mhoushu and the black Lohe. The Angami women wear Mechala - the wrap around skirt and shawls of unique designs and patterns.

Both men and women enjoy wearing beautiful ornaments like Beads, miniature mask pendants, bangles and bracelets. Pork with bamboo shoots is the common diet of the Angamis.


Language
Angamis speak Tenyidie which is the most common language among them. Angamis mother tongue is Angami Language and is identified with different names such as Gnamei, Ngami, Tsoghami, and Monr.

Angamis celebrate their main festival which is called as Sekrenyi in Nagaland. The festival falls in the in month of February and marks the beginning of the lunar year. Among the local people this ten day festival is also known as the Phousnyi and the foremost ritual of the festival is Kizie. In Kizie the few drops of the rice water taken from Zumho (top of the Jug), are carefully put into the leaves and placed at three main points of post of the house by a woman. All young men in the next morning in the village get up early and take a bath in the village well and they adorn themselves with the new shawls (white Mhoushu and the black Lohe). This ceremony is known as Dzuseva.

The Thekra Hie is the main attraction of this festival, where the young ones of the village gather to sing and dance to the tunes of the traditional music. They make fun and enjoy themselves with the rice beer and plates of meat. Hunting is the another important excitement of the festival. The major part of the ceremony falls on the eighth day when the gate pulling or the bride pulling is performed