History :
Magadha Empire ruled from 684 B.C - 320 B.C in India. The Magadha Empire is mentioned in the two great epics Ramayana and Mahabharata. It is been known that Shishunaga dynasty found the Magadha Empire. The greatest empires and religions of India originated here like the Gupta Empire and Mauryan Empire. These empires saw advancements in ancient India's different subjects like science, mathematics, astronomy, religion, and philosophy and were considered the Indian "Golden Age". Buddhism and Jainism the great religions were also founded in Magadha Empire. 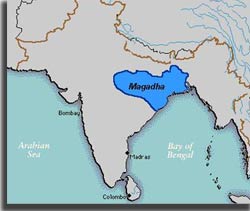 Magadha Dyansty was the dominant force in the political scene of Northern India of those times. This name was first mentioned in the Veda, and later it is seen mentioned in several other ancient Indian sources. The fertile soil of this state and the enthusiasm of the people for cultivation resulted in the fast development of agriculture and the state became richer. Very soon the state entered into trade relationship with other parts of India.

King Bindusara (545/544-493 B.C.) of the Haryanka dynasty is the founder of this dynasty, the brilliance of which illuminated the history of India for a long time. The Sisunaga dynasty captured power from the Haryanka dynasty. This period saw the glory of the development of the Buddha-Jaina religions. After the Sisunagas, it was the period of the Nanda dynasty to be followed by the Maurya. The King Bimbisara, was murdered by his Prince Ajatashatru. King Pasenadi, king of neighboring Kosala Ajatashatru was caught by an ambush and captured with his army. However, King Pasenadi allowed moving and army returned to Magadha. King Pasendi also got his daughter married to the new young king.


Due to the death of Buhlul Lodhi in July 1489, his son Nizam Khan succeeded him, under the title Sikandar Shah. He turned out to be the most capable ruler of the Lodhi Dynasty. Sikandar Shah established a fair system of administration & founded the historical city of Agra. His empire extended from Punjab to Bihar and he also signed a treaty with the ruler of Bengal, Alauddin Hussain Shah.Sikandar Shah was the one who founded a new town where the modern day Agra stands and was known to be a kind and generous ruler who cared for his subjects.

The Magadha-Maurya it was a period of colorful events when the first large states of India took shape, gained strength and then contended for supremacy. King Udayin (461-445 B.C.) shifted the capital of Magadha from Rajagriha to Pataliputra (modern Patna) and it became a very famous center of wealth, learning and power in ancient India.

Magadha Empire was among those which formed one of the sixteen Mahajanapadas (Sanskrit, "great countries") or regions in ancient India. The core area of the Empire was the area of Bihar south of the Ganges; its capital was Rajagaha (modern Rajgir). Magadha Empire expanded from Eastern Uttar Pradesh to the most of Bihar, and Bengal with the conquest of Licchavi and Anga respectively. Magadha Empire is also mentioned in Buddhist and Jain texts. The initial reference of Magadha people occurs in the Atharva-Veda where they are found listed along with the Angas, Gandharis, and Mujavats. The republican community of Rajakumara was also included in the Magadha Dynasty.

Magadha Empire gained much power during the rule of King Bimbisara and successor Ajatshatru. Bimbisara was murdered by his son Ajatshatru. The Magadha Empire in India extended upto modern day Bihar, Patna and some parts of Bengal. The empire extended from River Ganges to the kingdoms of Kosala and Kashi which were annexed. The Magadha Empire fought many battles with most of its neighbors. During this period Ajatshatru built a huge fort at his capital Pataliputra. During the era Buddha prophesized and this place become a popular place of trade and commerce.

Magadha pursued a policy of expansionism and it had links with the states of Eastern and Northern India. The powerful states of Koshala, Avanti and Lichchavi were the contestants with Magadha for controlling the trade routes, especially the Ganges river system. This resulted in frequent wars. King Udayin (461-445 B.C.) shifted the capital of Magadha from Rajagriha to Pataliputra (modern Patna) and it became a very famous center of wealth, learning and power in ancient India With powerful military force, the Magadha Empire naturally had an upper hand over conquering neighborhood places and spreading their territory. However, after the death of King Udayan, the Magadha Empire started to decline very rapidly. Internal disturbances and corruption within the kingdom led to its decline. The Magadha Empire was finally taken over by the powerful Nanda dynasty who then ruled here for a good amount of time before being taken over by the Mauryas.

The 16 Mahajanapada and their capitals were as follows:
The Magadha administration was divided into judicial, executive and military functions. Magadha was a region which was known for productive agriculture. Iron mines were accessible and provided resources for tools and weapons. Elephants formed an important component of the army in the region. Ganga and its tributaries provided a means of cheap and convenient communication. Villages had their own assemblies under their local chiefs called Gramakas.