History :
The Pala Empire originated from 8th to 12th century and was a dynasty which controlled Bihar and Bengal regions of South Asia. The name Pala is the synonym for "protector" and was used as an ending to the names of all Pala monarchs. The founder of the Pala Dynasty was Gopala. He came to power in 750 AD and was the first independent Buddhist king of Bengal Gaur by democratic election. He ruled from 750-770 and consolidated his position and extended his control over all of Bengal.

The successor of King Gopala was Dharmapala (770-781). He made the Palas a dominant power of northern India. He defeated many kings to keep his supreme power. Darmapala was an able administrator too. With his dominant power he extended his throne in the Kanauj.

Devpala was the descendant the throne of Pala Empire after Dharmapala and ruled for about 40 years. During his reign Bengal rose to eminence in north Indian politics. His high diplomatic skills helped him to maintain his authority. He fought with Pratiharas and extended the Pala empires frontier up to the Himalayan region in the north, and the Vindhyas in the south. The immediate successors of Devpala were weak and because of which the dynasty disintegrated after him. 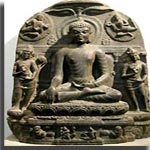 The later Mahipala I, who is known as the founder of the second Pala kingdom and ruled from A D 988 to 1033, regained the lost glory to the kingdom. He succeeded in recapturing the lost territories in northern and western Bengal and bought Pala dynastic rule to a firmer footing. Mahipal I became a highly popular king by his public welfare activities.

The Pala Dynasty very much patronized Buddhism at a time when it was in decline in the rest of India. Pala dynasty ruled for about four hundred years with the achievements of Bengal. It was a widespread empire, organized administrative system, ruling policy focusing on public welfare, also excellence in the field of arts and cultivation of knowledge and literature - all these contributed to the glory of the Pala rule. The Pala rulers had the capacity and courage to protect North India from the attack of Pratiharas and Rastrakutas. The dynasty had close trading relations with the countries of south-east Asia. 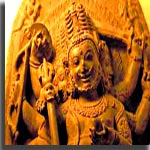 Art and architecture was also encouraged during this period which was identified by "Pala School of Sculptural Art". The Pala Empire had great works likes Vikramshila Vihar, Odantpuri Vihar, Jagaddal Vihar.


Pala administration
Pala Dynasty administration was Monarchial and King or Monarch was the centre of all power. Pala rulers adopted Imperial titles like Parameshwar, Paramvattaraka, and Maharajadhiraja. They appointed Prime Ministers and the Line of Garga served as the Prime Ministers of the Palas for 100 years. Pala Empire was divided into separate Vuktis (Provinces), Vuktis into Vishaya (Divisions) and Mandalas (Districts). Darvapani, Someshwar, Kedarmisra, Vatt Guravmisra smaller units were Khandala, Bhaga, Avritti, Chaturaka, and Pattaka. Their Administration covered widespread area from the grass root level to the imperial court

Palas Army was fourfold and the army consisted of: infantry, cavalry, elephants and chariots. Vatsaraja Dharmapala had been mentioned as the owner of unlimited number of horses, elephants and chariots in the copperplates. It is amazing to know that Kings of Bengal still depended on Four-Horsed Heavy Chariots as when the use of chariots had been backdated in India and other parts of the world. Palas had to depend upon their vassal kings for war horses. As being a riverine land and swarthy climate Bengal region was not good enough for breeding quality war-horses. The inscriptions on Pala Copper plates reveal that mercenary forces were recruited from the Kamboja, Khasa, Huna, Malwa, Gujarat, and Karnataka.

The Kamboja cavalry was the cream of the Pala Empires armed forces. The Kamboja forces of Pala Dynasty maintained smaller confederates (Sanghas) among themselves and obedient followers of their commander. Palas divided the army into following posts: Senapati or Mahasenapati (General) controlling foot soldiers, cavalry, soldiers riding elephants and camels, navy, and the various army posts like Kottapala (Fort guards) and Prantapala (Border guards). Palas had a huge army and the legend of "Nava Lakkha Shainya" (Nine lac soldiers) were popular during the reigns of Dharmapala and Devapala.