History :
Satavahanas were referred as Andhras or the Andhra Dynasty.The Empire was established in the 3rd Centure BC in the western Deccan Plateau. Aitareya Brahmana claims Andhras as the exiled and degenerated sons of Viswamitra. Ashoka's inscriptions mention the Andhras as border people and as Dravidian people who lived between the Godavari and the Krishna. The names of Satavahanas Rulers had emerged from Andhra Pradesh or delta areas of Krishna and Godavari River. Though there were many principalities on the delta of Godavari and Krishna River during Chandragupta Mauryan time , Simukha was the king to unify them into a single kingdom in the 3rd century BC and became the founder of Satavahana dynasty. He laid the foundation in 235 BC and ruled for 23 years.

Kanha (212 - 195 BC) was the successor of Simukha who extended the territory as far as Nasik. Later Satakarni-I probably a son of Kunala became the next king. Though he ruled for only two years, he achieved a lot by conquering Western Malwa, and even performed Asvamedha and Rajasuya Yaga. After Satakarni-I his next succesors were his two minor sons Vedistri and Satisiri who with the help of their mother Nayanika ruled the kingdom.

The next king was Satakarni-II who ruled from about 166 to 111 BC. He extended the boundaries of his reigh from central India across the Vindhyas, perhaps up to the river Ganges and ruled Andhras for nearly fifty six years. The next important king who succeded the throne was Gautamiputra Sri Satakarni and he ruled from about 70 AD to 95 AD. He brought large territory under his rule and overthrew Nahapana, the Saka chief in the 18th year of his reign. Gautamiputra was not only a warrior, but was also equal to the tasks of peace. As he reformed the society of its abuses and upheld the interests of the subjects. Pulumayi-II took over from Gatamiputra Satakarni, and ruled from 96 AD to 119 AD. He took the empire to its zenith. He expanded it further to the south. History depicts that he was a contemporary of Chastana, he enlarged the Stupa of Amaravathi. 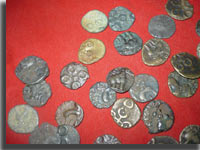 Siri Satakarni ascended the throne after Pulumayi-11 who seems to have ruled for a long term of 29 years (from 120 - 149 AD). Rudradaman his father-in-law from whom a prosperous economy boomed explains the abundant coinage of him. The next ruler Siva Siri Pulumayi ruled from about 150 to 156 AD. The revenge for the defeat of Nahapana by the Satavahana snatched Anupa region by Rudradaman. However, Rudradaman failed to recover Asika, Asaka, Mulaka and Kuntala. His ship-marked coins suggest extensive maritime trade during his reign. Later his son Siri-Sivakhada Satakarni succeeded and ruled from 157 to 159 AD.

Sri Yana succeeded the throne in 160 AD and ruled up to 189 AD. His abundant coins bearing the legend Sri-Yana explains prosperity of the empire. But at the end of his regime, Abhiras broke the unity of the Deccan by taking the region around Nasik.

The next king of Satavahana Dynasty, Madhariputra Svami Sakasena succeeded Sri Yana. Minting coins bearing lions and elephant motif on it was done by him. With him ended the age of the great Satavahanas and by the end of the 2nd century A.D., the rule of the Satavahanas became a history of the past.

Administration
The Satavahana Empires society reflected the existence of four classes. The first class was the people who controlled and administered the districts, second were the officials. Third were the Vaidhya, cultivators and fourth class were common citizens. The head of the family was the Grihapati.Both Buddhism and Brahmanism prevailed during the Satavahana rule. Among the various sects of people state of religious tolarence existed following varied faiths. During Satavahana Dynasty trade flourished and even organisation of workers doing various trades existed like Broach, Sopara and Kalyan the important trade points. The Satavahana rulers patronised Prakrit which was the common language used on documents. Satavahana Empire is said to be partitioned into five provinces. The western territory of Nasik was possessed by the Abhiras. The Ikshavakus dominated over the eastern part in the Krishna -Guntur region.The Chutus possessed the southwestern parts and extended their territory to the north and east. The south eastern parts were under the Pahalvas.