India's pharmaceutical sector is gaining its position as a global leader in the recent years. The pharma market in India is expected to touch US$ 74 billion in sales by 2020 from the current US$ 11 billion, according to a Price water house Cooper (PwC) report.

The domestic pharmaceutical market grew 21.9 per cent to record sales of Rs 5,369 crore (US$ 1.01 billion) in March 2012, as compared to the previous year, according to an analysis by a market research firm, All India Organisation of Chemists and Druggists (AIOCD) AWACS. Exceptional growth in pharma companies resulted in the record sales. 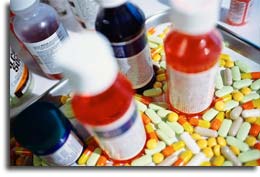 Abbott, with its subsidiaries Abbott Healthcare and Solvay, registered sales of Rs 306 crore (US$ 57.84 million) to retain its number one position in the domestic market.

back to pharmaceutical INDUSTRY