On the back of increasing sales of generic medicines, continued with the growth in chronic therapies and a greater penetration in rural markets, the Indian domestic pharmaceutical market is expected to register a strong double-digit growth of 13-14 per cent in 2013. The year 2012 closed with a growth of 12 per cent, according to data from a research firm.

The Indian pharmaceuticals sector attracted foreign direct investments (FDI) worth US$ 9,776 million between April 2000 to November 2012, according to the latest data published by the Department of Industrial Policy and Promotion (DIPP). India's exports of drugs and pharmaceuticals grew by 27 per cent to Rs 60,000 crore (US$ 11.19 billion) for the year ended March 2012, according to data compiled by Pharmaceutical Exports Council of India (Pharmexcil). 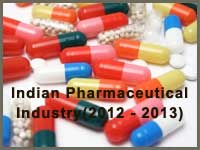 Indian pharmaceutical industry is projected to show double-digit growth in the near future owing to a rise in pharmaceutical outsourcing and rising investments by multinational companies.

Emerging sectors, such as bio-generics and pharma packaging will also pave way for the pharmaceutical market to continue its upward trend during the FY 2012- FY 2014.

back to pharmaceutical INDUSTRY