Cotton plays an important role in the Indian economy as the country's textile industry is predominantly cotton based. India is one of the largest producers as well as exporters of cotton yarn. During 2012-13, India had about 11.77 million hectares under cotton cultivation and produced 34 million bales (170 kg each) of cotton, making it the second largest producer of cotton worldwide.

The states of Gujarat, Maharashtra, Andhra Pradesh, Haryana, Punjab, Madhya Pradesh, Rajasthan, Karnataka and Tamil Nadu are the major cotton producers in India. India accounted for about 4.72 per cent of global textiles and clothing trade in 2013. 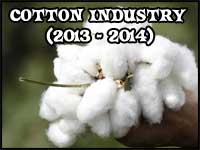 According to the Cotton Association of India (CAI) for the period 2013-14 the cotton production was 37.5 million bales (170 kg each).The State of Gujarat produced about 11.15 million bales putting it at the number one spot.

Maharashtra's production was at 7.5 million bales and Andhra Pradesh comes third at 6.75 million bales. According to field experts the crop conditions have improved since last year. A slightly higher crop is therefore estimated for the next fiscal if the weather is conducive.

back to cotton INDUSTRies