The Indian consumer durables idustry is broadly segregated into urban and rural. The growth in India’s consumer market would be primarily driven by a favorable population composition and increasing disposable income. 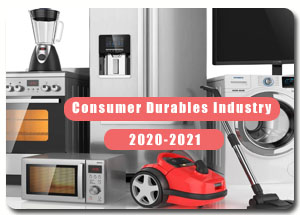 According to the Department for Promotion of Industry and Internal Trade, between April 2020 and December 2020, exports of electronic goods from India stood at US$ 8.77 billion.

The Indian consumer durables industry is expected to generate 5 lakh new employment opportunities and achieve cumulative foreign exchange inflows worth US$ 75 billion and investments of about US$ 1 billion by 2025. Indian appliance and consumer electronics (ACE) market is expected to increase at 9% CAGR to reach Rs. 3.15 trillion (US$ 48.37 billion) in 2022. Increasing electrification of rural areas and wide usability of online sales would also aid growth in demand.