The Indian Chocolate Industry has come a long way since long years. Ever since 1947 the Cadbury is in India, Cadbury chocolates have ruled the hearts of Indians with their fabulous taste. Indian Chocolate Industry?s Cadbury Company today employs nearly 2000 people across India. The company is one of the oldest and strongest players in the Indian confectionary industry with an estimated 68% value share and 62% volume share of the total chocolate market. It has exhibited continuously strong revenue growth of 34% and net profit growth of 24% throughout the 1990?s. The brand of Cadbury is known for its exceptional capabilities in product innovation, distribution and marketing. With brands like Dairy Milk, Gems, 5 Star, Bournvita, Perk, Celebrations, Bytes, Chocki, Delite and Temptations, there is a Cadbury offering to suit all occasions and moods. 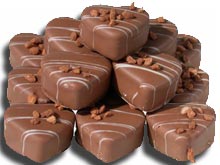 Today, the company reaches millions of loyal customers through a distribution network of 5.5 lakhs outlets across the country and this number is increasing everyday. In 1946 the Cadbury?s manufacturing operations started in Mumbai, which was subsequently transferred to Thane. In 1964, Induri Farm at Talegaon, near Pune was set up with a view to promote modern methods as well as improve milk yield. In 1981-82, a new chocolate manufacturing unit was set up in the same location in Talegaon. The company, way back in 1964, pioneered cocoa farming in India to reduce dependence on imported cocoa beans. The parent company provided cocoa seeds and clonal materials free of cost for the first 8 years of operations. Cocoa farming is done in Karnataka, Kerala and Tamil Nadu. In 1977, the company also took steps to promote higher production of milk by setting up a subsidiary Induri Farms Ltd., near Pune.

In 1989, the company set up a new plant at Malanpur, MP, to derive benefits available to the backward area. In 1995, Cadbury expanded Malanpur plant in a major way. The Malanpur plant has modernized facilities for Gems, Eclairs, and Perk etc. Cadbury operates as the third party operations at Phalton, Warana and Nashik in Maharashtra. These factories churn out close to 8,000 tonnes of chocolate annually.

In response to rising demand in the chocolate industry and reduce dependency on imports, Indian cocoa producers have planned to increase domestic cocoa production by 60% in the next four years. The Indian market is thought to be worth some 15bn rupee (?0.25bn) and has been hailed as offering great potential for Western chocolate manufacturers as the market is still in its early stages.

Chocolate consumption is gaining popularity in India due to increasing prosperity coupled with a shift in food habits, pushing up the country's cocoa imports. Firms across the country have announced plans to step-up domestic production from 10,000 tonnes to 16,000 tonnes, according to Reuters. To secure good quality raw material in the long term, private players like Cadbury India are encouraging cocoa cultivation, the news agency said. Cocoa requirement is growing around 15% annually and will reach about 30,000 tonnes in the next 5 years.

The UK based confectionery giant, Cadbury is a dominant player in the Indian chocolate market and the company expects the energy glucose variant of its popular Perk brand to be singularly responsible for adding five per cent annually to the size of the company?s market share.

The size of the market for chocolates in India was estimated at 30,000 tonnes in 2008. Bars of moulded chocolates like amul, milk chocolate, dairy milk, truffle, nestle premium, and nestle milky bar comprise the largest segment, accounting for 37% of the total market in terms of volume. The chocolate market in India has a production volume of 30,800 tonnes. The chocolate segment is characterized by high volumes, huge expenses on advertising, low margins, and price sensitivity.The count segment is the next biggest segment, accounting for 30% of the total chocolate market. The count segment has been growing at a faster pace during the last three years driven by growth in perk and kitkat volumes. Wafer chocolates such as kit kat and perk also belong to this segment. Panned chocolates accounts for 10% of the total market. The chocolate market today is primarily dominated by Cadbury and Nestle, together accounting for 90% of the market.