Learn more about Indian Jewelry
India has a glorious history which affects each and every aspect of Indian lifestyle. Jewellery has always remained an integral part of the Indian lifestyle. The diverse history of India has great influence on the jewellery styles as well. Indian jewellery history goes back to almost 5000 years. Ever since pre-historic times India people had a penchant for adorning themselves with Jewellery especially women. Gold, silver, stones, gems, etc. are the defining aspects of Indian jewellery.

Indian jewellery industry is much varied in styles and designs in accordance to the different regions. Indian jewellery has the unique design to the state and are not found anywhere else in the world. For example the delicate filigree work in silver which is unique to Odisha and Andhra Pradesh; Rajasthan is popular for Meenakari (jewellery enameling work). In south, the temple town of Nagercoil is famous for temple jewellery;  Kundan jewellery is famous in Delhi. Indian Jewellery Industry has a variety of ornaments in different styles and designs for every part of the body. 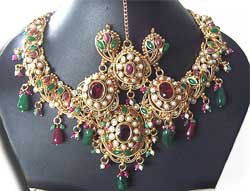 In ancient times, people used to adorn themselves with variety of necklaces, rings, anklets made of crude stones and other metals. As time has gone people learnt the art of polishing metals like gold and silver and learnt to extract semi-precious stones and gems from the mines. Even during ruling empires the rich kings wore jewellery that made them look like Gods. Every big and small piece of adornment was made of gold and precious stones like rings, earrings, bangles, chains, crowns, anklets, etc. For past many years India has been ruled by different empires. All these empires have left an incredible mark on the jewellery styles. The Mughals had their own distinctive style of using precious stones and intricate carvings, the Rajputs had their enameled jewellery and so on.

In today's modern world though many new and sophisticated styles have emerged to urban centers, the traditional style of jewellery is in vogue and is usually the first choice in jewellery. In the contemporary Indian market one would find beautiful blend of traditional and modern jewellery in gold and silver that are decorated with gorgeous precious stones that always attract and amuse buyers.

Indian jewellery and Indian women are the terms always linked inherently. In India during wedding as well as numerous other occasions, a woman is gifted jewellery by her parents and relatives. Although such gifts are meant to give her security in contingency, ornamentation is an obvious purpose. All the cities across the length and width of India have outlets of jewellers were some are traditional and some are modern jewellers, catering to the need of all kinds of customers.

Indian houses have various kinds of jewellery arts ranging from Meenakari and Kundan to stone & bead work. The craft of cutting and polishing precious & semi-precious stones give them glamorous face whihc is artistic. Emeralds, rubies, garnets, amethysts, corals, sapphires, and turquoises are stones which are used for the enhancement of gold and silver jewellery. In south India, women are most known for Gold jewellery. South Indian gold is considered auspicious as a status symbol. The jewellery which was developed years past is known by the name of 'Antique jewellery.' This has jewellery with dull and rough look, combined with an old world-world charm, and this serves as the major USP of such jewellery. Bead art in India is 5000 years old and was during the time of Indus Valley Civilization.

There are different kinds of jewellery in India like:

Jobs in Indian jewellery industry are growing as there are new avenues for training and development, skill enhancement in jewellery design and production. The institutions offering training in gemology and jewellery designing are many in the country like the National Institute of Fashion Technology (NIFT) have opened many training centers across India which is imparting training to professionals for a glittering career. As there is an increase in jewellery exports, more national and international companies in the field are setting up new centers in India and recruiting trained professionals to keep the pace with growing international market. A trained gemologist or jewellery designer in India can find attractive job and sparkling career abroad.