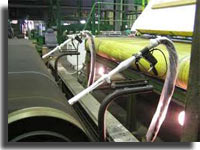 Indian rubber industry has been growing in along with the strength and importance, as a part of India's burgeoning role in the global economy. India is the world's largest producer and the third largest consumer of natural rubber and is also one of the fastest growing economies globally. With a stable annual growth rate of 8-9%, rising foreign exchange reserves, rapid expansion in the capital markets and FDI inflow, India proudly stakes its claim as the second fastest growing major economy in the world. Such factors combined with high concentration of automobile production and the presence of large and medium industries in South India, Chennai has become the perfect place for the event India Rubber Expo-2011.

The Indian Rubber Consumption is as follows

The size of the Indian Rubber Industry is,there are about 6000 unit comprising 30 large scale, 300 medium scale and around 5600 small scale and tiny sector units. Such units are manufacturing more than 35000 rubber products, employing 400 hundred thousand people, which involves22000 technically qualified support personnel, contributing Rs. 40 billions to the National Exchequer through taxes, duties and other levies. The Indian Rubber Industry plays a vital role in the Indian national economy as the rubber plantation sector in India produces over 630 hundred thousand tonnes of natural rubber and there is a projected production of more than one million tonnes in near future.

The export share of Indian natural rubber has increased tremendously over the years and have reached 76000 tons in 2003-04. India's exports of rubber products, which include tyres, exceeded Rs.2000 cores according to a recent estimate. Products exported are as follows:

It has around 1200 members affiliated to it spread all over the country. The Association has its central office at Mumbai with 4 regional offices at New Delhi, Kolkata, Chennai and Mumbai and a Chapter office at Pune.

A person with minimum graduation can have a good career in this industry but specialization in the subject would give an added advantage. Sectors covered by Indian Rubber Industry for the employment of the individuals are :