Government of India set up the Department of Biotechnology (DBT) under the Ministry of Science and Technology in 1986 with the aim of enhancing the Biotech Industry in India. Since then DBT has produced one of the best scientists of the country since its establishment. India has become the Hub of Biotechnology since the last decade and has become the main center of attraction for global investments due to the skilled and knowledgeable manpower available in India. Due to the rich resources available in the country, India has become one of the major areas for setting manufacturing units and Research laboratories by the MNC's. 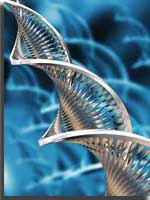 Success of Biotechnology industry in India was a difficult one in the early stages due to the long research period and limited funding. So the investors remained away from this industry for a long time period but once Biotech industry made its market presence, funds from investors flowed like rivers in this sector. In the next five years, biotechnology sector is expected for an investment of 7 to 8 billions which can result in a turnover of Rs. 9 to 10 billions. Biotechnology is a dynamic field which is inherited from various disciplines such as Biology, Biochemistry, Genetics, Cytology, Chemistry, Pharmacology, Bioinformatics and impacting important areas such as Medicine, Agriculture and environment.

Indian Biotechnology industry is considered as one of the sunrise sectors in India. The industry can be classified into five different segments. Biopharma, Agri-biotech, Bioinformatics, Bio-industrial and Bio services with each concentrating on a particular area, 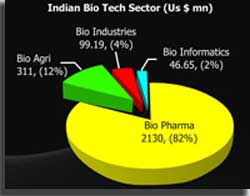 The Indian biotech sector has set a target of $5 billion in revenues by fiscal 2010-11. The Indian government's Department of Biotechnology conveys that annual sales could touch $25 billion by 2015. India's biotech business is on an upswing and has a formidable global presence. In terms of volume, it is ranked fourth in the world, while in terms of value of output it stands 13th. And it is the vast pool of skilled manpower and low costs that are drawing global biotech giants to partner with Indian companies.

Among the Indian companies in the biotech sector two firms have exceeded 100 million dollars in revenue. There are more than 265 firms registered in India. The top ten companies capture 47% of the market. The top five companies were homegrown; Indian firms account for 62% of the biopharma sector and 52% of the industry as a whole. The Association of Biotechnology-Led Enterprises (ABLE) has aimed to grow the industry to $5 billion in revenues generated by 1 million employees by 2009. The International Finance Commission of the World Bank has granted $43 million to 4 projects in India out of the $110 million invested in 14 biotech projects globally.

In today's advanced era, when people are exposed to so many physical disorders, Biotechnology plays a vital role in developing medicines, vaccines, energy production, and conservation. To keep pace with the competitive world, India has recently launched a comprehensive programme in biotechnology to make use of the resources available. In the year 1986 the Department of Biotechnology (DBT) was established under the ministry of Science and Technology. It is imperative that India has to keep up with the increasing demand for food from the ever expanding population. Agricultural land is also shrinking. Biotechnology can be used in a wide range of economic activity ranging from environment, animal husbandry, medicinal and aromatic plants, bio fuels, aquaculture and products like silk and leather.

In the year 2008-09 Indian Biotechnology Industry's overall turnover was Rs 12,137 crore, said Ms Kiran Mazumdar Shaw, CMD of Biocon, and head of the Karnataka think-tank, the Vision Group on Biotechnology, citing the annual Biospectrum survey of industry. The revenue was Rs 10,273 crore in 2007-08.

Entry level jobs in the field of Biotechnology require a minimum graduation course. Those who have done PG courses can opt for research work starting as a junior researcher. The Career options in the Biotech Industry extend to medical schools, research laboratories, pharmaceutical manufacturing companies, chemical, agriculture and allied industries.

India is ranked among the top 12 Biotech destinations in the world and is the third biggest in Asia-Pacific in terms of the number of biotech companies. Investments in the segment are also growing at the rate of about 38 % for the last three years and have touched 560 million dollars in 2006-07. Biopharma is one of the important segments of the Indian biotechnology sector and it constitutes about 70 % of the domestic biotech industry. Out of total 325 biotechnology companies in India, more than 40 % are in the biopharma sector.