Indian Insurance Industry has got the deep-rooted history. These evidences are from the writings of Manu (Manusmrithi), Yagnavalkya (Dharmasastra) and Kautilya (Arthasastra). The writings speak about pooling of resources that could be re-distributed in times of calamities such as fire, floods, epidemics and famine. Ancient Indian history has preserved the very earliest traces of insurance in the form of marine trade loans and carriers contracts. In India the Insurance has evolved over time heavily drawing from other countries, England particularly. 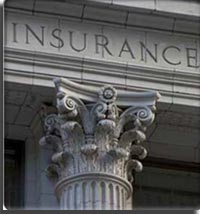 In India the advent of Life Insurance started in the year 1818 with the establishment of the Oriental Life Insurance Company in Calcutta. In the year 1829, the Madras Equitable had began the life insurance business in the Madras Presidency. British Insurance Act enactment was done in the year 1870. In the last three decades of the nineteenth century, the Bombay Mutual (1871), Oriental (1874) and Empire of India (1897) were started in the Bombay Residency. This era, however, was dominated by foreign insurance offices which did good business in India, namely Albert Life Assurance, Royal Insurance, Liverpool and London Globe Insurance and the Indian offices were up for hard competition from the foreign companies.

History of general insurance was during the 17th century to the Industrial Revolution in the west and the consequent growth of sea-faring trade and commerce in the 17th century. The General Insurance has its roots in the year 1850 in Calcutta from the establishment of Triton Insurance Company Ltd., by British. The Indian Mercantile Insurance Ltd was set up in the year 1907. As this was the first company to transact all classes of general insurance business. In the year 1957 General Insurance Council, a wing of the Insurance Association of India was established.

With the emergence of growing demand for insurance, more and more insurance companies are now emerging in the Indian Insurance Industry. With the opening up of the economy, there are several international leaders in the insurance of India are trying to venture into the India insurance industry. In the year 1993, Malhotra Committee was formed which initiated reforms in the Indian Insurance Industry. The aim of which was to assess the functionality of the industry. It was incharge of recommending the future path of insurance in India.It even attempted to improve various aspects, making them more appropriate and effective for the Indian market.

In the year 1999 The Insurance Regulatory and Development Authority Act was formulated which brought about several crucial policy changes in the India. In 2000 it led to the formation of the Insurance Regulatory and Development Authority. The goals of IRDA are to safeguard the interests of insurance policyholders, as well as to initiate different policy measures to help sustain growth in the industry. This Authority has notified 27 Regulations on various issues like Registration of Insurers, Regulation on insurance agents, Re-insurance, Solvency Margin, Obligation of Insurers to Rural and Social sector, Investment and Accounting Procedure, Protection of policy holders' interest, etc.

Indian Insurance Industry is flourishing with several national and international players competing and growing at rapid rates. The success comes usually from the easing of policy regulations, and India has become more familiar with different insurance products and the period from 2010 - 2015 is projected to be the 'Golden Age' for the Indian insurance industry. 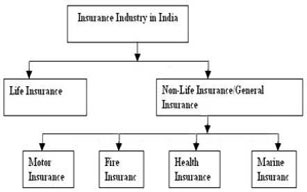 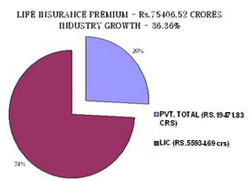 According to the Life Insurance Council, the Indian life insurance industry is considered the fifth largest life insurance market with US$ 41-billion & growing at a rapid pace of 32-34% annually. In March 2010 the Life Insurance Corporation of India (LIC) registered an 83% increase in new business income, while private players posted a 47% growth in new business premium. According to IRDA, the insurers in the year 2009-2010 sold 10.55 million new policies with LIC selling 8.52 million and private companies 2.03 million policies. In the year March 2010, LIC held 65% market share in terms of new business income collection with the private sector contributing the remaining 35% share in 2009-10.

Indian Insurance Industry is one of the booming Industries of the economy and is growing at the rate of 15-20 % per annum. Along with banking services, it contributes to about 7% to the country's GDP. Insurance is being a federal subject in India and which is governed by Insurance Act, 1938, the Life Insurance Corporation Act, 1956 and General Insurance Business (Nationalization) Act, 1972, Insurance Regulatory and Development Authority (IRDA) Act, 1999 and other related Acts.

To pursue a career in Indian Insurance Industry, the candidate should pass the entrance examination conducted by the Actuarial Society of India, Mumbai. The students who pass 10 + 2 or equivalent exam are eligible. There is requirement of License to work in this field which can be achieved through a training programme.