The Indian Solar Industry has immense potential for a tropical country like India where around 45% of households, mainly rural ones, do not have access to electricity, according to the "Indian Solar Energy Market Outlook 2012". The industry has witnessed rapid growth over the past few years and is projected to grow further in future. As India is blessed with ample solar radiation and most part of the country receives 300 to 330 sunny days in a year. India today receives solar energy equivalent to more than 5,000 Trillion kWh per year, which is far more than its total annual energy consumption. India's geographical location, large population and government support are assisting it to become one of the most rapidly emerging solar energy markets in the world. 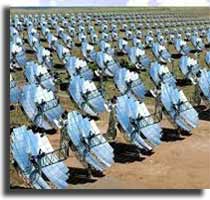 Gradually India is becoming a favorite investment destination for both local and global players. Today Indian economy has the second-fastest rate of increase in GDP in the world - 7.1%. The country accounts for one thirds of the world's population without access to electricity. The situation arises despite several initiatives and policies to support poor households. Five different ministries have structurally handled the Indian energy sector from which among them the Ministry of New and Renewable Energy. India is probably the only country in the world with most dedicated ministry for renewables. The country ranks sixth in the world in terms of total energy consumption and needs to accelerate development of the energy sector to meet its growth aspirations. Although the country is rich in coal and abundantly endowed with renewable energy in the form of solar, wind, hydro and bio-energy, India has very small hydrocarbon reserves (0.4% of the world's total). Being a net importer of energy, more than 35% of the country's primary energy needs are ensured through import.

Today with growing advancement and pace of development India needs more power. Not only to cover its daily power shortfalls (several hours per day), but also to support its economic development. In 2008 According to CEA, the peak demand was 120 gigawatts of power, while only 98 gigawatts could be supplied. According to an analysis by the Indian PV project developer Astonfield, quoting the President of India Energy Review, this deficit is likely to grow to 25 gigawatts by 2012. The targeted share of renewable energy is 24% for 2031, with the amount of solar energy increasing to 56 gigawatts of installed power. 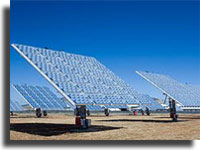 Many states have started promoted solar based applications by giving incentives and tax savings. In order to boost the Solar Industry States like Gujarat and Rajasthan have formulated transparent and progressive regulatory framework. Besides, states like Delhi, Uttar Pradesh, West Bengal, Maharashtra and Chandigarh are promoting solar energy in rural, urban and semi urban areas. After all the efforts the average electricity consumption in India is still among the lowest in the world at just 630 kWh per person per year, but this is expected to grow to 1000 kWh within five years.

Speaking of big numbers and energy consumption: every month 8-10 million new mobile phones are connected in India. This is an interesting market segment for solar PV as well: thousands of new GSM poles will be needed across the country. In 1976 The Solar Energy of India (SESI), established having its Secretariat in New Delhi is the Indian Section of the International Solar Energy Society (ISES). All aspects of renewable energy, including characteristics, effects and methods of use are covered and it provides a common ground to all those concerned with the nature and utilization of this renewable non-polluting resource. With the distribution of 10 million solar lanterns in remote areas and to nomadic populations, India could save 500 million litres of kerosene a year. 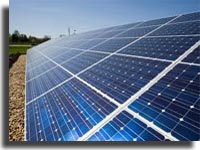 The government has mandated that 12% of all electricity is to come from renewable sources by the year 2010. The Indian solar power production is slated to grow to 500 MW by 2012.

The potential customers of Solar Energy installation fall into these categories:

India Consumes 3.7% of the world's commercial energy making it has the 5th largest consumer of energy globally. Total Installed capacity of 144912 MW. India is endowed with rich solar energy resource Over 5,000 trillion kilowatts of solar energy in a year. The average intensity of solar radiation received on India is 200 MW/km square.

Total Contribution to the economy / sales

Planned and unplanned Solar Power outages of 4 to 1O hours a day for households and business are common. Upwards of 40% of electricity is "stolen" in India - not paid for - thereby increasing the cost of electricity for the paying consumers.

Solar-based energy today accounts for only 0.5% of that number with a grid-interactive (grid-hybrid) solar power totaling only 2.12 MW from just 33 such installations.