Diamonds from the Indian subcontinent are known around the world for ages. The diamond industry in India is mainly involved in the process of cutting, polishing, and exporting diamonds. India is a world leader in the manufacturing of cut and polished diamonds. 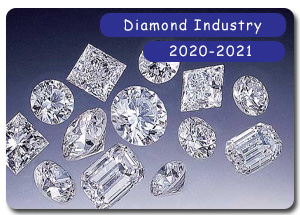 The production volume of diamonds in India totalled over 28 thousand carats in the fiscal year 2020. This was the second-lowest production volume in the last nine financial years and the decline is due to the covid lockdown restrictions. India is the only Asian country that mines diamonds and the diamond mining region lies within the state of Madhya Pradesh.

The value of rough diamonds imported into India has increased in recent decades. Across the globe, out of every ten diamonds that were used, nine of them came from India. India exports more than 75% of the world’s polished diamond, gems and jewellery, contributing to the country's foreign exchange earnings (FEEs). It is one of the fastest-growing sectors, mostly export-oriented and labour intensive, contributing around 7% to the country’s GDP and 15% to India’s total merchandise export. Employing more than 5 million people currently, it is expected to reach 8.23 million by 2022.

Because of its low costs and availability of high-skilled labour, India is deemed to be the hub of the global jewellery market, particularly the diamond industry.

back to diamond INDUSTRies