The Indian Healthcare industry reached US$ 193.83 billion by 2020 and is estimated to touch US$ 372 billion by 2022. Healthcare has become one of India’s largest sector, both in terms of revenue and employment. Healthcare comprises of hospitals, medical devices, clinical trials, outsourcing, telemedicine, medical tourism, health insurance and medical equipment. The Indian healthcare sector is growing at a brisk pace due to its strengthening coverage, services and increasing expenditure by public as well private players. Add to this the covid conundrum and the long term side effects of it. 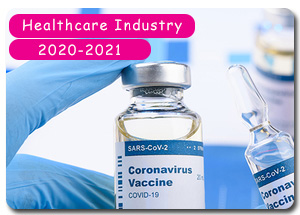 India's competitive advantage lies in its large pool of well-trained medical professionals. India is also cost competitive compared to its peers in Asia and Western countries. The cost of surgery in India is about one-tenth of that in the US or Europe.

The large scale corona vaccine drive in India is a testimony to its robust healthcare industry given the vast population at stake.

Between April 2000 and December 2020, FDI inflows for drugs and pharmaceuticals sector stood at US$ 17.74 billion, according to the data released by Department for Promotion of Industry and Internal Trade (DPIIT).

The Government of India is planning to increase public health spending to 2.5% of the country's GDP by 2025.

back to health INDUSTRies