India’s IT industry contributed around 8% to the country’s GDP in 2020 and is expected to contribute 10% to India’s GDP by 2025. Exports from the Indian IT industry are expected to increase by 1.9% to reach US$ 150 billion in FY21. In 2020, the IT industry recorded 138,000 new hires. Software exports increased by 7% YoY to reach Rs. 5 lakh crore (US$ 67.40 billion) in FY21 from Rs. 4.66 lakh crore (US$ 62.82 billion) in FY20.
Largescale digitization and the industry's timely transition to remote working environments that helped to keep up the industry’s growth amid the coronavirus pandemic. 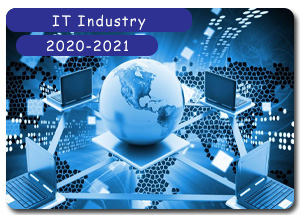 Indian IT companies have attracted significant investment from major countries. The computer software and hardware sector in India attracted cumulative foreign direct investment (FDI) inflows worth US$ 62.47 billion between April 2000 and September 2020. The sector ranked 2nd in FDI inflows as per the data released by Department for Promotion of Industry and Internal Trade (DPIIT).

The Indian IT industry is expected to grow to US$ 350 billion by 2025 and BPM is expected to account for US$ 50 55
billion of the total revenue. India is the topmost off-shoring destination for IT companies across the world.

back to iNDIAN IT INDUSTRies