Indian Railways is among the world’s largest rail network, and its route length network is spread over 67,956 kms, with 13,169 passenger trains and 8,479 freight trains, plying 23 million travellers and 3 million tonnes (MT) of freight daily from 7,349 stations. India's railway network is recognised as one of the largest railway systems in the world. 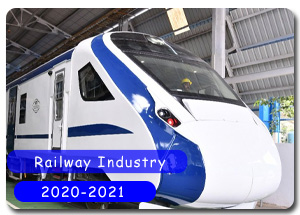 India was among the top 20 exporters of railways globally. India’s export of railways has grown at a CAGR of 31.51% during the last decade.

Foreign Direct Investment (FDI) Inflow in railway-related components stood at US$ 1.12 billion from April 2000 to September 2020.

Indian Railways plans to run on 100 per cent electricity by 2024 and become a net-zero emission network by 2030. In the next five years, Indian railway market will be the third largest, accounting for 10% of the global market. Indian Railways, which is one of the country's biggest employers, can generate one million jobs in the years to come according to the Railway Industry.

back to railway INDUSTRies