Great Himalayan National Park in the state of Himachal Pradesh is situated in the beautiful district of Kullu with snowcapped mountains, river valleys, and steep cliffs. It is concentrated more towards the upper ranges of Himalayas. The Himalayas offering the most eye landscapes in the world is supposed to be the highest mountain ranges in the world and geologically the youngest. The Great Himalayan National Park is situated among the high altitude wildlife reserves of the Himalayas. This National Park sheltering different species of wildlife along with more of alpine flora is one of the best example of Himalayan ecosystems which remains undisturbed. However most of the time the national park is under glaciers and ice. This park is also popularly known as Jawaharlal Nehru National Park and was established in the year 1984 mainly to preserve the endangered wildlife species of this Himalayan Ecosystem. Apart from the wildlife reserves the bewitching beauty of the park draws lot of tourist attention to this area. There are nearly four major rivers originating from the glaciers in the park. Apart from water source from the park it also helps in the livelihood for the local community. The "Western Tragopan" which is a rare wildlife is seen in this National Park along with 200 species of birds and over 30 species of mammals.

The Great Himalayan National Park lies in Seraj Forest Division (in Kullu District), in the upper catchment areas of the Jiwa, Saint and Tertian rivers.

The ideal time to visit this park in summer is between April to June and during the autumn season it is between from September to November. 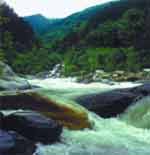 Gandhinagar is not provided with an airport but however it can be reached from the nearest airport in Ahmadabad.Domestic Airlines like the Jet Airways, Air Sahara, Indian Airlines and Spice Jet operates regular flights to Ahmadabad from other parts of the country.

Gandhinagar is very well connected by road from the rest of the state. There are regular government and private bus services that connects Gandhinagar to the neighboring cities.