Mumbai,the "Gateway of India" is one of the most important cities of the world.Mumbai,today is vital,alive and in more ways,than one a part of the main land.Situated on the western coast of India,Mumbai is Indias financial hub and an active port where ships from all over the world dock.The city is a rich mixture of diverse cultures,religions and people.A cosmopolitan megapolis that houses varied cultures,traditions,cuisines etc.

Mumbai is located on the Salsette Island, Mumbai is mostly as Sea level with average elevation ranging from 10 to 15 meters.The city is situated between 18° 96' north latitude and 72° 81' east longitude.

The early inhabitants of Mumbai was were Kolis or fishermen.In the historic time Mumbai formed a part of the Maurayan empire.Subsequently it came to be ruled by Silahares.During the mughal rule it was acceed to Portugal by Bahadurshah,the then Sultan of Gujarat.In 1661 King Charles-II of England married princess Catherine de Barganza of Portugal and island of Mumbai was given in dowry to King Charles-II.Thus Mumbai came in possession of the British.After India's independence Mumbai slowly rose to an economic power and today it is the most outsatnding city in India.

Gudi Padva is considered one of the four most auspicious days in the year when people start new ventures. It is believed that Lord Brahma created the world on this day and so he is worshipped specially at this time. A gudi (banner) with a swastika-marked pot and silk cloth is raised to announce victory and joy. It is remniscent of the valiant Marathas returning home from their successful conquering expeditions of war.

This festival is the celebration of the good over the evil.It is celebrated on the 10th day after the navratras.

It is festival of colours,normally for two days.On this day people throw colours and coloured water on each others.They exchange sweets among friends and families.

This is celebrated with most pomp and show.In mumbai large and small idols of Lord Ganesha are worshipped and then taken into large procession to the waterfront of immersions.Each locality has competition with other for display of idols.

This temple is situated at Bhuleshwar.Mumbadevi is the patron goddess of the Kolis the original inhabitiants of Mumbai and is said to be an incarnation of Parvati,consort of Lord Shiva.

This temple attracts large crowds daily.On holidays it is very difficult to access the locality.There are several legends about how the goddess has blessed her devotees in different ways.

This temple is built of black stone with ornamental octagonal dome.The original temple was built some 200 years ago and the present temple supplanted in about 1830.The lingam at the shrine is sad to have miraculously risen to its present position.

This is situated in the heart of the commercial fort area and was constructed in 1672.Though simple in structure the interior of the church has some exquisite adorations.

It is major place of worship for muslims.The mosque has an attractive and beautiful set of arches surrounded in a business centre of Mumbai. 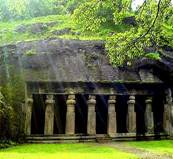 This is one of the most picturesque of the little islands in the Mumbai harbour.Situated at a distance of 9N.M. by sea the island is also known by the name Gharapuri.The place is famous for the enormous carving and its rock cut temples.The island is wooded with mango groves and other trees like tamarind,karvandas and also palms.The caves give us some of the best specimens of Brahurarical art and are connected with the worship of Lord Shiva. 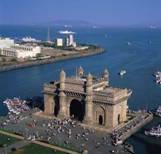 Appollo Pier as it was known earlier,is called the Gateway of India.During the British regime,it was built in the memory of the visit of the late king George and queen mary of ENgland.This memorial was declared open on December 24,1924 by Earl Reading,the then viceroy of India.

A massive building in Indo-Saraccnic style housing the Prince of Wales Museum was built in 1914.The museum has an art section besides Archeological and Natural history section,Paintings of Elephanta,Ajantha,Ellora and other historic places are also on view here.Museum has three main sections viz.Art,Archeology and Natural history.

Just in the compound of museum,stands the modern and the best art gallery of the city.The Jehangir Art Gallery opened on january 21st 1952 by the then Chief Minister of the erstwhile state of Bombay K.G.Kher.

This is one of the most outstanding landmarks of Mumbai.The credit of design and architecture of this monument goes to Sir Gilbert Scott of a cost of three hundred thousand rupees.It is a mixture of Gothic and early French style.The height of the tower is 250ft.

The place is presently known as Hutatma Chowk.This name is given to the place to commemorate the memory of those who died in the formation of the Maharashtra state.Most of the leading banks and offices are situated in and around this place which has since become a special landmark.It can consequently be called the heart of mumbai business. 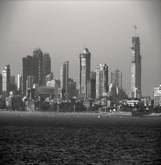 This place is a mini Manhatten of four square kilometre.Once there was Arabian sea all around untill it was reclaiimed to build huge skyscrapers.It has head office of Air India together with many nationalized banks.New Vidhan Sabha Bhawan also stands here markedly over other structures.

This is one of Mumbai's favourite evening resorts.The drive is flanked by a wide variety promenade on the west and long ine of residential buildings on the east.At the northern end of the drive is Chowpatty sands and a bit further is Walkeshwer,sided by a Malabar hill.Towards night when the lights are on, the entire drive glows like a "Queens Necklace".

This terrace garden was built in 1880 on the top of three reservoirs,which store 30 millions gallons of water,cleaned and chlorinated for supply through taps.Visitors can view sunset from here in the lush,colourful and magnificent surroundings.. 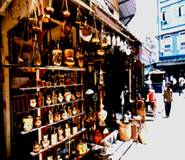 As is popularly called,it could mean "Thieves market" ,but it is not so.Situated off Mohammad Ali road and near Pydhoni in a thickly crowded area is this second hand market.

It is good place to pick up antique replicas,old chandeliers,brass curios,intricately carved rose wood furniture and every kind of antique.

This is the only zoo in the city.Here you have Victoria gardens and Prince Albert museum.The garden provide many a convenient bower where one may rest or one may wander about watching animals and birds and enjoy a ride on a camel or an elephant. 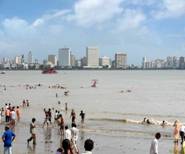 The beach is located on the west side Santacruz railway station with its attractive swimming facilites and the silver sands of the Juhu beach is one of the fashionable holiday spots of Mumbai.

Colaba Causeway and Fashion Street is famous for clothes.  How To Reach This Bazaar?

Zaveri Bazaar (Jewellery Market) is famous for its diamond, gold and silver jewellery.

The Mangaldas Market  is the largest indoor cloth and dress material market in Mumbai.

Chor Bazar is a paradise for the antique hunter and this has odd collection of shops deals with goods from second hand car parts to handmade furniture. One can buy good painting,  jewellery, wooden articles, statues, leather ware and general bric-a-brac, silver coins and lots of other things from here.  How To Reach This Bazaar?

Mumbai is well connected with railways, with the city being headquarters to two railway zones - Central and Western. Victoria Terminal now renamed Chhatrapati Shivaji Terminal is the main railway station of Mumbai. Bombay Central, Churchgate, Dadar and Kurla are the other prominent railway stations.

You can reach Mumbai by the frequent State Transport buses connecting Mumbai to other neighboring cities, towns and states. Chattrapathi Shivaji Terminal and Dadar are important bus terminals amongst others.

Mumbai is India's international gateway and has the busiest domestic air network in the country.The domestic terminal at Santa Cruz is at the distance of 25km from downtown Mumbai. These terminals are well connected with taxis and shuttle services.