India's banking sector currently has a value of about Rs 81 trillion (US$ 1.31 trillion). It has the potential to become the fifth largest banking industry in the world by 2020 and the third largest by 2025, according to an industry report. The face of Indian banking has changed over the years. Banks are now reaching out to the masses with technology to facilitate greater ease of communication.

Online money transfers and money credited directly to an account have become a preferred mode of inward remittances in India, rising to 22 per cent in fiscal 2013 from 14 per cent in 2009, according to an RBI report. More banks have started opening rural branches and taking banking to the villages. Also the government has given the go-ahead for increasing foregin holding in certain banks. 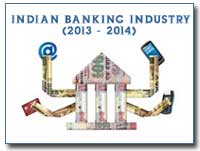 India is one of the top 10 economies in the world, where the banking sector has tremendous potential to grow and has grown by leaps and bounds in the fiscal year 2013.The number of ATMs has doubled over the past few years, with more than 100,000 in the country at present (70 per cent in urban areas). They are estimated to further double by 2016, with over 50 per cent expected to be set up in small towns. Also, the scope for mobile and internet banking is big in the years to come.

At the start of 2013, only 2 per cent of banking payments went through the electronic system in the country. Today, mobility and customer convenience are viewed as the primary factors of growth and banks are continuously exploring new technology to grow with the tide.

back to banking INDUSTRY