India is the largest dairy producer in the world. There had been considerable growth and development in this dairy industry for the past few decades. 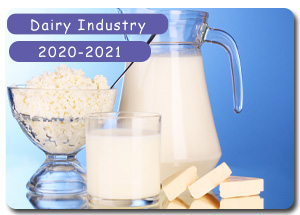 Private dairy players constitute about 60 per cent of dairy processing capacity in the country. Indian dairy industry has grown at about 12 per cent during the last 5 years, with value-added products driving market growth. It is a significant contributor to farmers' income as approximately 70 million farmers are directly involved in dairying. The Indian Dairy Industry accounts for approximately one-third of rural household income in India. Apart from milk, the Indian dairy industry also produces many by-products of milk like ghee, butter, yoghurt, ice-creams, cream and much more adding value to the industry.


The 6 major milk producing states in India are: Together they accounted for 60% of total milk production in 2020. Also, the per capita availability of milk in India was estimated at 394 grams/day (national average).

back to dairy INDUSTRies