With an installed capacity of about 39248 MW as of March 2021, of wind energy, Renewable Energy Source of wind currently accounts for 24.7% of India’s overall installed power capacity of 382151 MW. Wind Energy holds the major portion of 41.5% of total RE capacity (94434 MW) among renewable sources of energy in India. 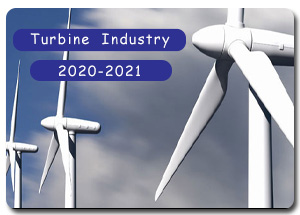 The Government of India has announced a laudable Renewable Energy target of 175GW by 2022 out of which 60GW will be coming from wind power.

The Wind Potential in India was first estimated by National Institute of Wind Energy (NIWE) at 50m hub-height i.e. 49 GW but according to the survey at 80m hub height, the potential grows as much as 102 GW and 302GW at 100 Meter hub height. Further a new study by NIWE at 120m height has estimated a potential 695GW.

Supports rural economy
Does not need any other resource like water.
The fuel is free
It does emit CO2
Land can be used for farming as well.
Cost effective when compared to the other non-conventional modes

back to turbine INDUSTRies