The Kanha National Park is spread over an area of about 1,945 sq. km in the state of Madhya Pradesh in India and is surrounded by hills formed as a result of geographically ancient volcanic activity. The Kanha National Park which was created in 1955 by a special law is always compared to the N'Gorongoro National Park of Tanzania in Africa. Apart from the wildlife this sanctuary is also noted for its serene beauty and landscape. It also takes the pride of one of the earliest protected areas selected for "Project Tiger" in the country. The Kanha National Park which draws a major tourist crowd is also a good source of revenue for the state for the sanctuary is very much towards the preservation of variety of animal species.

The central Kanha valley was declared a sanctuary way back in 1933. The adoption of this sanctuary into a national park took place in 1955, after much turbulence and storm regarding rampant killing of wildlife in the area at the time. One of the famous success stories of the park is the survival of the Barasingha population in the park, which went down to as low as 66 animals in 1970 from the earlier 3000 and which through huge efforts has now revived to a respectable number of around 1000. With the help of Project Tiger, the population of tigers has doubled since 1976. 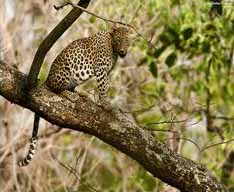 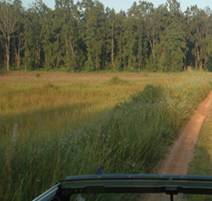 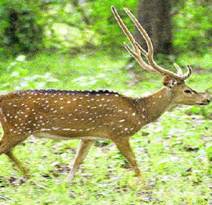 The Kanha National park is situated in the Mandla District of Madhya Pradesh.

The ideal time to visit this park is anywhere within the months of April to June and November to January.

The Bamni Dadar is otherwise most commonly referred as the Sunset Point is one of the major attractions within the forest. It got its name so for viewing the sunset from this is place is simply splendid. Apart from the sunset the visitors can also get to see the Kanha's forests characterized by rich or profuse growth of flora and fauna. Animals that can be sighted around this point are typical of the mixed forest zone: sambar, barking deer, gaur and four-horned antelope. 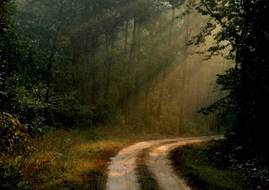 The Southern tropical Moist Mixed Deciduous Forest and Southern Tropical dry Deciduous Mixed Forest makes the flora of the Kanha National park. Initially this park was inhabitated by a small group of tribal people due to which we can get to see here and there plateaus of grasslands and meadows. The slopes of the plateaus here are thickly covered with Bija, Haldu, Dhaora trees which stand along the long stretches of Ban-rahar, Bamboo and Sindhur tress.The most commonly sighted trees in this area includes the Sal, Saj (Terminalia tomentosa), Dhaora (Anogeissus latifolia), Tendu, Arjun (Terminalia arjuna), Amla (Emblica officinalis), Palas (Butea monosperma), Salai (Boswellia serrata), Mango (Mangifera indica), Jamun (Syzygium Cumini) and Bamboo among many others. In addition, Lagerstroemia, Boswelia, Pterocarpus and Madhuca enhance the floral richness of Kanha National Park. 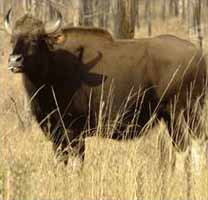 The recent study of fauna in this area gives a census report of about 22 species of mammals of which the most commonly seen animals are Striped Palm Squirrel, Common Langur, Jackal, Wild Pig, Chital or Spotted Deer, Barasingha or Swamp Deer, Sambar and Black Buck. Apart from these the visitors also get to spot out species like Tiger, Indian Hare, Dhole or Indian Wild Dog, Barking Deer, Indian Bison or Gaur. Patient watching should reward the visitor with a sight of: Indian Fox, Sloth Bear, Striped Hyena, Jungle Cat, Leopard, Mouse Deer, Chausingha or four horned antelope, Nilgai, Ratel and Porcupine. The other rare and occasionally seen species are Wolf which lives in the far East of the park, Chinkara found outside the Park's Northern boundary, Indian Pangolin, the smooth Indian Otter and the small Indian Civet. Kanha National Park is world renowned for its population of 'Royal Bengal Tigers'. The Park is also the only true habitat for 'White Tigers'. 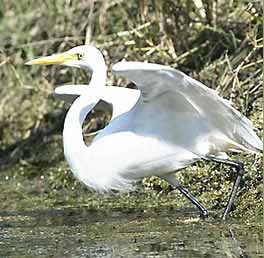 It is the home of both resident and migratory birds. Early mornings and late afternoons are best for birdwatching.

This is another major attraction of people visiting this sanctuary.

Taking an elephant ride through the park can be joyous as you can easily spot vivid variety of birds along with animals in the wild.

The Kanha Museum is attached to the Kanha national park portraying attributes and activities of the park and the tribal culture of the state of Madhya Pradesh.

The nearest airport from Kanchipuram is in Chennai, which is 75 kms away. One can take flights for most of the important Indian cities and for abroad from Chennai.

Trains for Kanchipuram are available from Chennai, Chengalpattu, Tirupati, and Bangalore. Kanchipuram is connected to both broad gauges that lead to western parts of Tamilnadu and North India and meter gauge that connect to the southern most part of Tamilnadu.

Kanchipuram is well connected by a good network of roads. Many of the major transport corporations of Tamilnadu operate buses connecting Chennai and Kanchipuram.