The share of agriculture and allied sectors in gross value added (GVA) of India was 17.8 % in FY20. In 2020-21, the total food grain production was 298 million tonnes in India. Production of horticulture crops in India was estimated at a record 319.56 million metric tonnes (MMT) in FY20. India has the largest livestock population of around 535.78 million, which translates to around 31% of the world population. Milk production in the country is expected to increase to 208 MT in FY21 from 198 MT in FY20, registering a growth of 10% y-o-y. Sugar production in India reached 26.46 MT during the current sugar season according to the Indian Sugar Mills Association (ISMA). During 2020 crop year, food grain production reached a record of 296.65 million tonnes. 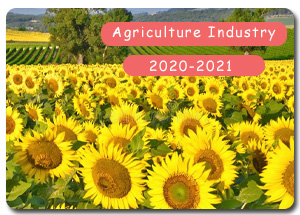 According to the Department for Promotion of Industry and Internal Trade (DPIIT), the Indian food processing industry had attracted Foreign Direct Investment (FDI) equity inflow of about US$ 10.20 billion between April 2000 and September 2020, the first half of the financial year.

Total agricultural export from India grew at a CAGR of 2.27% during FY16-20 to reach US$ 35.09 billion in FY20. India's spices export increased quite considerably. Indian Agriculture product exports is likely to reach US$ 60 billion by 2022.

As with most of the Indian industries, the agriculture also had its fair share of negative impact owing to the corona virus scare and the associated lockdown. The first wave, though did not trouble the villages that form the backbone of agriculture, caused some troubles with the logistics of the yield movements. The second wave entered all the nook and corner of India, mostly the villages and battered the inhabitants left and right. Armed with not much medical infrastructure, the agricultural industry workers suffered a lot.

back to agriculture INDUSTRY