India boasts a wide variety of flora and fauna which are diversified in nature and which depend upon the geography of the region.


FAUNA
There are around 500 varieties of mammals, 2000 species of birds and 30,000 types of insects and a wide variety of fish, amphibians and reptiles are found in the country according to the latest census estimate. 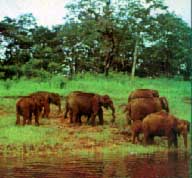 ELEPHANTS
ON THE MOVE IN
MUDUMALAI SANCTUARY,
TAMILNADU


Popular mammals include the Elephant , the famous white lions and some common lions, the Royal Bengal Tiger , Rhinos , Wild Bisons some varieties from the cat family, deer, monkeys, wild goats, etc. Elephants are found in the sparsely populated hill areas of Karnataka, Kerala and Odisha.


Lions are found in the rocky hills and forests of the Gir area of Gujarat, Tigers in the Sunderbans and the Brahmaputra valley. The famous Project Tiger is a scheme financed by the government of India to safeguard the tiger in its habitat in nine selected reserves.

Indian Fauna also include the wild ass of Rajasthan, Nilgiri Langur , Lion-tailed macaque , Nilgiri mongoose and Malaber civer of the southern hills and the spotted deer. Leopards are found in many forests, Wolves roam the open country. Cheetahs are found in the Deccan plateau. 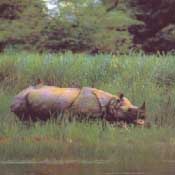 INDIA'S FAME THE
ONE-HORNED RHINO
A huge number of snake varieties, lizards and crocodiles account for the reptile count. Snakes include the deadly King cobras to the equally poisonous Kraits.

Scorpions and insects are aplenty in this country. Disease carrying mosquitoes and destructive locusts are to be found. Useful insects include the bees, silkworms and the Lac insect.

Bird-Life in India is rich and colorful. The birds include the beautiful Peacock to the Parrots, and thousands of immigrant birds. Other common Indian birds are pheasants, geese ducks, mynahs, parakeets, pigeons, cranes, and hornbills. India now maintains 80 national parks, 441 wildlife sanctuaries and 35 zoological gardens. 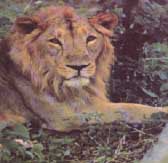 KING OF
ANIMALSTHE
MAJESTIC LION
Thanks to its wide range of climatic conditions, India has a rich variety of vegetation that no other country in this world can boast of. According to the distribution of the flora, India can be classified into, Western Himalayas, Eastern Himalayas, Assam, Indus Plain, Ganga Plain, Deccan, Malabar and the Andamans.

Indian flora varies from the Western Himalayan and Assamese, from the species of the Indus Plain to those of the gangetic plain, from the Deccan and Malabari to the vegetation of the Andamans. The floral wealth ranges from the Alpine to the temperate thorn, from the coniferous to the evergreen, from scrubs to deciduous forests, from thick tropical jungles to cool temperate woods.

The Indus plain supports very scanty vegetation and the Ganges Plain is under cultivation. The Deccan region is full of scrubs and mixed deciduous forests. The Malabar region is under commercial crops like coconut, betel, pepper, coffee and tea. Andaman region is abounding in evergreen and mangrove forests. 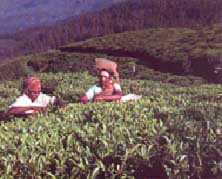 MUNNAR TEA PLANTATIONS
India's original vegetation was mainly deciduous forest because of her tropical location. It is unfortunate that the forest cover has been reduced to 13% of the total surface area.

Of the deciduous trees Sal and Teak are the most important. Sal is found in eastern India and it is used for buildings because it is resistant to termites and fire. Deodars, Pines, cedars, firs ands spruce are found in the foothills of the Himalayas. Sandalwood is found in Karnataka and Tamilnadu. Coconut palms are dominant in Kerala.