National parks and sanctuaries are administered at the state level and are promoted by them as a tourist attraction, which earns them sufficient revenue to keep the sanctuaries running.

Most of the sanctuaries provide well are at least optimum accommodation and other facilities but they had to be booked in advance. Some parks even provide modern guest houses.

Usually van and jeep rides and also boat trips are arranged to give the visitors a good view of the animals in their natural habitats. Watchtowers and hides are also available.

Some of the notable parks and sanctuaries are listed below. 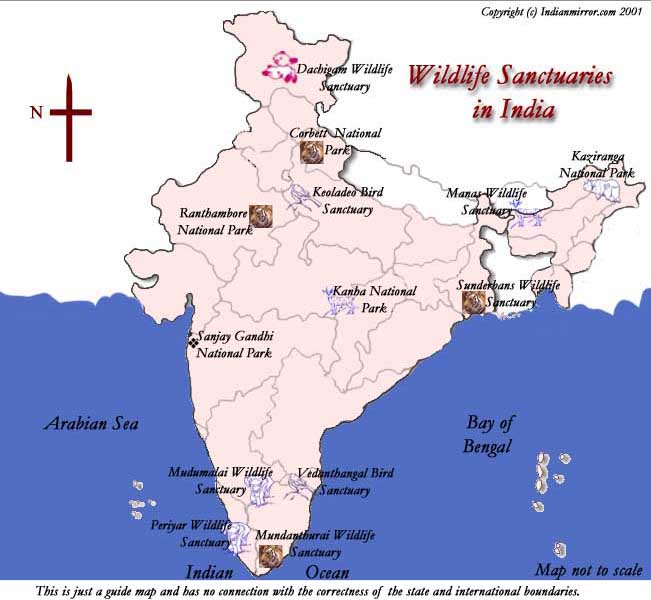 Some of the notable parks and sanctuaries are listed below.

This sanctuary has a scenic valley and a meandering river. Wildlife here includes rare Kashmiri stags, black bears , and musk deers. In recent years the wildlife here have been vastly endangered. It is 22 km by road from Srinagar.It is best to visit it during June- July.

This park in Uttar Pradesh is famous for its tigers. Other wild lives include cheetahs, deer, elephants, leopards, and sloth bears. The park has good scenery with sal and hardwood trees. There are numerous watch towers and daytime photography is allowed. Best time to visit is November to May.

This reserve in West Bengal is to the southeast of the city of Calcutta. It contains the mangrove forests of the Gangetic delta. It is an important haven for tigers but it also includes fishing cats and a wide variety of birds. It is accessible by a boat ride only. It can be visited around February- March.

This area bordering Bhutan is formed by the rivers Manas, Hakua and Beki Rivers and is situated in Assam state. The wildlife includes tigers, buffaloes , elephants , sambhars, swamp deers and langurs. The bodo rebels of Assam have recently used it and consequently most of its infrastructure has been destroyed. Visit it around January- March.

This park in Assam is famous for its one-horned Rhinos which are almost extinct now but for a few. The park is full of tall grasses and swampy areas. The rhinos can be spotted around the swampy areas, bathing. Egrets and other birds are also accommodated here. It can be visited from February to March.

Ranthambore or Sawai Madhopur in Rajsthan is smaller in size when compared to most of the parks in India. It is famous for its lake tigers but nowadays the number has dwindled thanks to large-scale poaching in these areas. It is located on the Mumbai- Delhi rail-line and is 160 kms by road from Jaipur. Best time to visit- November to May.

This is the best-known bird sanctuary in India, situated in Rajasthan. It is also called Bharatpur Bird Sanctuary and features a large number of migrating birds from Siberia and China, which include herons, storks, cranes and geese. It also houses deers and other wildlife. Visit it around September to February.

This Oasis in the deserts of Gujarat is famous for the Asiatic lions, which number around 250. They can be spotted around the lakes and other watering holes. It also includes crocodiles. The park remains closed from mid-May to mid-October.

This is one of the spectacular and most exciting parks for wildlife in India and is in Madhya Pradesh. Originally it was conceived to protect the swamp deers also called Barasinghas but now it also includes tigers, chitals, blackbucks, langurs and leopards. The park is closed from July to October.

This is a large and scenic park in Kerala state built around an artificial lake. It is famous for its large elephant population. Others include the wild dogs, Nilgiri Langurs, otters, tortoise, and hornbills. Best time to visit is around February to May.

This is situated around 35kms to the south of Chengalpattu in Tamilnadu and is home for a large variety of birds. Cormorants, egrets, herons, storks, ibises, pelicans, grebes and hornbills breed here from October to March. At the peak season of December to January more than 30, 000 birds can be spotted.

This one also known as Koddikarai is situated in Tamilnadu, around 90 kms from Tanjore. This is a wetland area jutting out of the Palk Strait that separates India and Sri Lanka. It is famous for flocks of migratory birds mainly flamingoes. Black bucks, spotted deers and wild pigs are found here. Time to visit: November to January.

This is located in Tamilnadu along its border with Kerala. It mainly consists of tigers but also has chitals, sambhars and lion tailed macaques. But it is extremely difficult to spot the tigers. Best time to visit is between January and March.

This is along the slopes of the western ghat mountains in the border between Tamilnadu and Kerala. It is also known as Indira Gandhi Wildlife Sanctuary. It has an area of around 1000 sq Km and houses elephants, gaurs, tigers, panthers, deers, boars, porcupines and wild cats. In its heart lies the Parambiculam Dam, which is of good scenic beauty. The best time to visit this is between February and June.