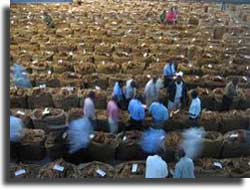 Tobacco production occupies the third position in the world with an annual production of about 725 Million Kgs. The production has different types grown like , flue-cured tobacco, country tobacco, burley, bidi and rustica. As an exporter of tobacco, India ranks sixth in the world next to Brazil, China, USA, Malawi and Italy.

Indian Tobacco and tobacco products earn a whopping annual sum of about Rs.10271 crores to the national exchequer by the way of excise revenue, and Rs.2022 Crores (2006-07) by way of foreign exchange. In India the per capita consumption of cigarettes is merely a tenth of the world average. The unique tobacco consumption pattern is the combination of tradition and more essentially the tax imposed on cigarettes. Cigarette smokers pay almost 85% of the total tax revenues generated from tobacco.

After China, India is the second largest producer of tobacco in the world. India has produced 572 m kgs of tobacco in 2003. However, India today holds a meager 0.7% share of the US$ 30 bn global trade in tobacco, with cigarettes contributing for 85% of the country's total tobacco exports. Of the total tobacco produced in the country, around 48% is consumed in the form of chewing tobacco, 38% as bidis, and 14% as cigarettes. Today India's per capita consumption of cigarettes in India is a tenth of the world average. 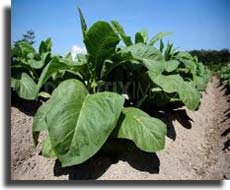 India has witnessed an unexpected increase in its tobacco exports, which has escalated by 55% to reach at $169 million in first quarter of 2008/09. Many big companies all around the world are showing their interest in purchasing tobacco at higher quantities from India and thanks to which the country's 2008-09 exports touced the mark of $600 million, which is 19% more than from $503 million of previous year. Indian exports have shown tremendous record at $169 million, which was $109 million in the same period a year ago. The biggest player in India Tobacco industry is ITC with a market share of 72%. Although it has been said that cigarette smoking is injurious to health but still, there is an increasing in the profit margin of the Indian Tobacco Company. With its wide range of invaluable brands, it leads from the front in every segment of the market. It's highly popular and highly consumed list of brands include Insignia, India Kings, Classic, Gold Flake, Silk Cut, Navy Cut, Scissors, Capstan, Berkeley, Bristol and Flake.

ITC has been able to reach the top position because of its single minded focus on value creation for the consumers via it's significant investments in product design, innovation, manufacturing technology, quality, marketing and distribution. ITC's cigarettes are produced in the state of factories which are situated at Bangalore, Munger, Saharanpur and Kolkata. These factories are known for their extremely high levels of quality, contemporary technology and work environment.

The Indian tobacco market generated total revenues of $9.9 billion in 2007, it represents a compound annual growth rate (CAGR) of 6.6% for the five-year period spanning 2003-2007.

India is exporting tobacco today to 80 nations which is over all the continents in the world. At present the Indian Tobacco Industry is providing livelihood to more that 25 million people in the country. From the total tobacco items exported from India, the unmanufactured tobacco shares around 80 % to 85 % of the total exports while the manufactured tobacco products hold around nearly 20 % to 25 %. In the unmanufactured tobacco exports, Flue Cured Virginia tobacco accounts nearly 75 % to 80 % export. The other varieties are- Burley, HDBRG, Natu, DWFC, Top leaf and Jutty are also exported which are used in making cigarettes. Non cigarette tobacco exported worldwide is Lalchopadia, Judi, and Rustica are used for chewing and making bidis. Around 8 % to 10 % non- cigarette tobacco is exported in throughout the world. According to the international trends, non cigarette tobaccos are the dominating item in the national export. According to the current situation in the international tobacco market India is proved to emerge out as the favorable market for the Indian tobacco export. The prices of Brazilian export have almost equalized the most expensive American tobacco cost. Zimbabwean farm prices have also seen an upward trend. There are several advantages which can be put forth for favoring the Indian tobacco. Like low unit production cost, average export prices of tobacco in India, which are found more competitive than that of the prices of Brazil, USA, Zimbabwe. 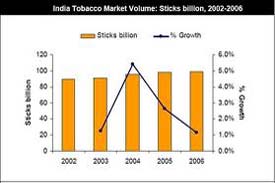 Indian Tobacco Industry's exports are likely to touch Rs. 16,050 million towards the end of current fiscal from Rs. about Rs. 15060.20 million in last fiscal as its growers are set to export more than 60% of their produce in view of domestic tobacco's rising demand in countries like Russia, Vietnam, U.K., Germany and Belgium.

The estimates made by the Associated Chambers of Commerce and Industry of India (ASSOCHAM) on Prospects of Tobacco to Exports for Current Fiscal, emphasizing that domestic tobacco sector in the past few years has come out of recession, the impact of which would be favorable and amount to higher tobacco exports.